The CEO of Wow! Stuff donned a floral crop top - borrowed from his daughter - to demonstrate the capabilities of the company's new mask printing machine. 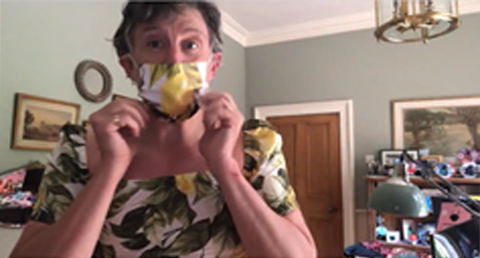 Wow! Stuff turned its hand to inventing a new kind of face mask during the early weeks of the pandemic, earning the company a nomination for a TAGIE, a Toy and Game International Excellence award. As part of the awards process, each nominee has been asked to prepare an acceptance speech for the virtual awards to be screened on the evening of Friday November 20th (should they win), and to post it to social media asking for votes.

Wasting no time in sharing his own submission - and a whole lot more - Wow! Stuff CEO Richard North’s Linkedin post has subsequently gone viral, with thousands of views and hundreds of comments from colleagues in the industry. In the video, Richard introduces ‘the world’s first home printable face mask’ and demonstrates how any item in a user's wardrobe can now enjoy a matching mask. Richard then removes his jumper, vanishes from view, and re-emerges sporting a brightly coloured floral crop top borrowed from his daughter Josie, one of the team responsible for the printable mask development along with Richard’s co-founder, Dr. Graeme Taylor.

One of Richard's peers, who wishes to remain nameless, commented on the LinkedIn post: “It appears lockdown has been less than kind to Richard. He really struggled to get into his dress. His days of a size 8 are clearly long gone and I urge everyone not to watch this video, especially before breakfast. Don’t vote for him. You would be better off voting for me to be the next president”.

Richard retaliated: “We should all be proud of our bodies no matter their shape, or lack of. Yes it’s true I was not at my best, having missed out on my tough training regime during lockdown, and my outfits are starting to pinch a little, but now I know what small dolls with tight dresses go through and I sympathise with them. LOL (meaning lots of laughs).”

Wow! Stuff’s Printable Face Masks come with a Mask Creator app so kids can design any pattern or logo, or add any image to their mask, making it ‘the most customisable face covering available anywhere in the world’. The Printable Mask product is the first of a line of SnapStyle brand products distributed in the USA by Skyrocket Toys, and by Wow! Stuff in the rest of the world. For the launch, Wow! Stuff is donating £10,000 to the UK’s NHS Charities Together.

To place your votes for the 2020 TAGIE awards, click here.