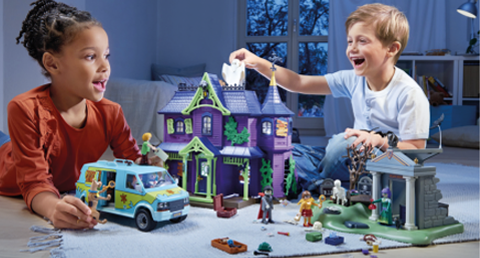 Playmobil has revealed its latest additions to the best-selling Scooby-Doo range, just in time for Halloween. The six spooky new sets each come complete with Scooby-Doo figure wearing a unique hat and Ghost Cards which can be used with the Mystery Machine, released in May, to project and identify each spectral character.

The hero playset, Scooby Doo! Mystery Mansion, offers kids a raft of surprises and fun features to enjoy including a trap door, a falling chandelier, stairs that turn into a slide, hideouts and a revolving door. This set also includes a coffin with eight different spooky sounds, and - with the help of the Playmobil app - ghosts and ghouls can be projected as a hologram on the ground floor. Scooby, Fred and Daphne figures are also included; in this set, Scooby wears a detective's outfit. The vampire can be unmasked to reveal a dastardly villain.

Scooby Doo! Adventure on the Cemetery features a glow in the dark skeleton and a mysterious coffin designed to trip up the gang as they attempt to locate and capture the ghost. The Adventure in the Witch's Cauldron playset includes Scooby-Doo, Velma, the Zeb Witch, cauldron, a collectible ghost card and many other accessories that Scooby and Velma need to reveal the witch's true identity.

Adventure in the Wild West, Adventure in Egypt, and Dinner with Scooby and Shaggy playsets are also available, alongside the iconic Mystery Machine and collectible mystery figures ideal for use with the sets.