‘Toys at Debenhams’ to launch in time for half-term

Up to 100 department stores will welcome a comprehensive selection of toys, as Christmas shopping gets underway early. 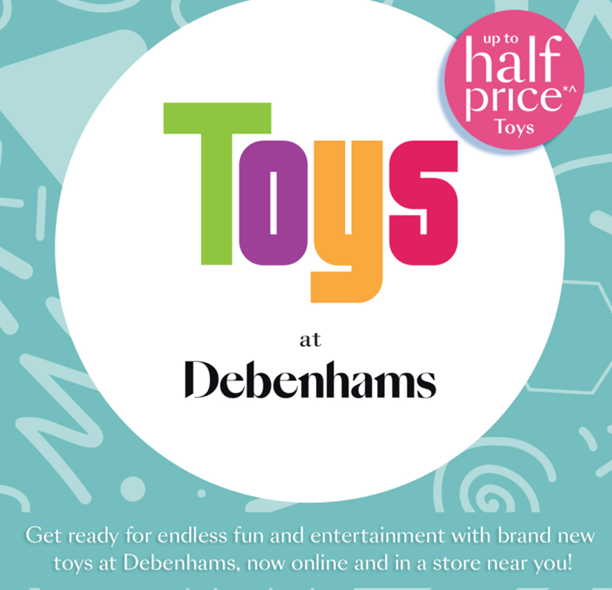 Debenhams says it’s making the most of Christmas by opening ‘Toys at Debenhams’ departments in up to 100 of its UK stores, just in time for half term. For a full list of the stores where Toys at Debenhams can be found, click here.

Key brands on offer in the toy departments, which launched online and in around 20 stores last week, include Lego, Barbie, Disney and Paw Patrol. Best-sellers so far include the Paw Patrol Mission Paw Air Patroller, from Spin Master, and the VTech Play & Learn Aeroplane.

Debenhams had announced in February that it would be closing its toy departments as it continues to seek a buyer. Mukesh Ambani, India’s richest man and the owner of Reliance Retail – which in turn owns Hamleys – announced earlier this week that he’d be pulling out of the bidding to acquire the chain. Several bidders are reportedly still in the running.

As one of the leading high street gift retailers, offering a range of exclusive and popular national brands, Debenhams has refreshed its brand mix for autumn/winter 2020 and has a number of new offers launching in time for peak trading. The retailer has also extended its popular two-hours free parking offer, which is now running every day rather than just at weekends.

Steven Cook, Debenhams’ managing director, said: “We have thought hard about what will make shopping easier and more convenient for our customers and we want to make sure we offer a range that meets the needs of the whole family. That’s why we are delighted to be able to offer a really comprehensive range of toys across all our channels as we build up to a “Giftastic” Christmas at Debenhams.”

Please see here for an update on this story.