The BTHA has confirmed to Toy World that the January show will no longer take place as planned. 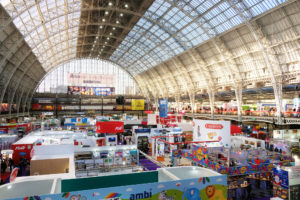 London Toy Fair 2021, originally scheduled to take place from 19th-21st January, has been cancelled. A statement from the BTHA, sent to Toy World, reads as follows:

“We have been working closely with Olympia London and we have together taken the decision that despite all best efforts and endeavours by both parties, regrettably the Toy Fair 2021 is unable to take place.

This conclusion is due to government restrictions now in place on large scale indoor events in light of the Covid-19 pandemic. The wellbeing of our exhibitors, visitors, staff and contractors is paramount and currently the risks are considered too great to allow the show to go ahead as dictated by the government regulations. We empathise with the industry’s disappointment – this is the first year that Toy Fair will not take place in 66 years.

We express our thanks to all exhibitors for their patience and understanding and for the support of the wider industry, and are very much looking forward to a big return in 2022 from 25th-27th January. As previously stated, we will be refunding exhibitors all stand space fees already paid. We will communicate directly with exhibitors in due course.”