Card Game for Rebel Girls is the brand-new licensed game from Gibsons, designed to encourage players to be bold, work hard and be proud. 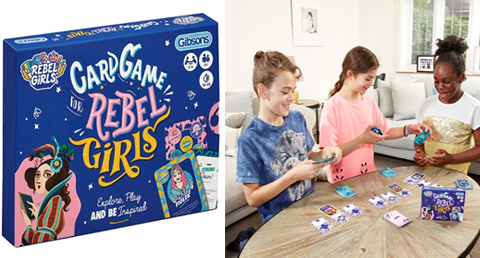 Gibsons has collaborated with the team behind the Good Night Stories for Rebel Girls novels to produce a product range that celebrates queens, activists, scientists, artists and sporting champions throughout history. The latest addition to the range is the Card Game for Rebel Girls.

The original stories tell true tales of heroic women throughout history, from Elizabeth I to Serena Williams. Published on the back of a successful crowdfunding project on Kickstarter, the books are the brainchild of entrepreneurs Elena Favilli and Francesca Cavallo who, having researched the lack of female role models in children’s literature, decided to write books which told a different story, and have sold over 4.5m copies worldwide.

There are five categories of Rebel Girls in the game: Champions, Warriors, Leaders, Pioneers and Creators. Characters such as Harriet Tubman, the Bronte sisters, Eva Peron, Hypatia, Boudicca, Katia Krafft, Wilma Rudolph and Junk Tabei are all included. The game allows players to learn a little more about each Rebel Girl and what their achievements have been throughout history. Each card describes the characters and explains what made them special and unique.

This empowering card game is ideal for children aged six plus, and includes personalised certificates for anyone who is inspired to achieve greatness in their own lives. Whilst learning about incredible women throughout history, the Card Game for Rebel Girls also encourages players to be bold, work hard and be proud.

Earlier this year Gibsons released two Jigsaw Puzzles for the Rebel Girls range. Available in 100 and 500 pieces, each puzzle has a slightly different design and features vibrant and imaginative illustrations by talented female artists from around the globe. Gibsons is proud to be a part of this important mission to inspire and instil confidence in young girls and boys.