The Lego Technic McLaren Senna GTR will be available globally from 1st January 2021. 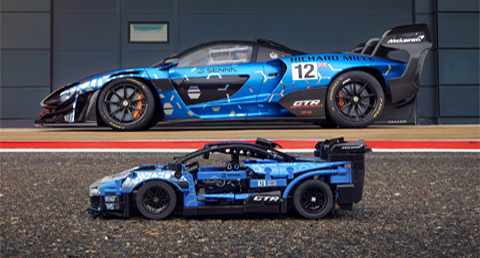 Extreme to the core like its iconic real-life counterpart, the new Lego Technic McLaren Senna GTR provides the ultimate thrill for sportscar lovers and motorsport fans alike looking for their next building challenge.

Combining the McLaren’s power and sophistication with the Lego Group’s design precision, the 830-piece model makes no compromises when it comes to engineering or style. The model is the first McLaren supercar to be recreated in Lego Technic form and is designed to provide the ultimate building thrill for those aged 10 and above.

The McLaren Senna GTR is a car unlike any other and this replica is packed with authentic features and design details that make it equally impressive.

Robert Melville, design director McLaren Automotive, commented: “The team responsible for the design of the McLaren Senna GTR worked incredibly closely with their design counterparts at the Lego Group to capture the extreme looks, excitement and essence of such an incredible supercar for Lego Technic builders. Just like the real thing, the Lego model is packed full of incredible details from the rear spoiler to the moving pistons in the V8 engine to the dihedral doors meaning that we’re as proud of the model as we are of the real car.”

The Lego Technic McLaren Senna GTR will be available globally from 1st January 2021, with an RRP of £44.99.

The Lego Technic McLaren Senna GTR is the latest model to be released as part of the long-standing partnership with McLaren Automotive that started in 2015, following the McLaren Senna Lego Speed Champions set launched in 2019.