Tipped to be a popular choice for consumers this Christmas, Cluedo Liars Edition Game from Hasbro Gaming is available to buy now. 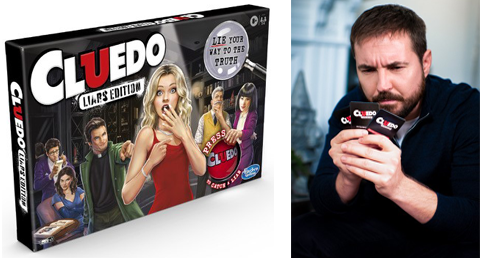 Line of Duty star, Martin Compston, has put his detective skills to the test in a new video marking the launch of Hasbro’s Cluedo Liars, a twist on the classic whodunnit board game.

The new clip sees Martin staring at a complex web of clues in what appears to be a police investigation room; only to reveal, in a comical plot twist, that he is in fact taking the murder mystery game far too seriously.

The opening scene shows the TV detective pacing around an evidence board, claiming: “I know they’re lying. One of you did it. It doesn’t make any sense.”

As the story unfolds, viewers see pieces of evidence peppered with humorous references, such as important case files kept in the kitchen, and iconic Cluedo character ‘Miss Scarlet’ being ruled out as a potential suspect and subtle nods to the Scottish actor’s best-known on-screen roles.

In Cluedo Liars, players must use their best lying skills to cause mischief and trouble amongst their competitors, whilst gathering evidence to detect which of their fellow players are also being deceitful, in order to crack the case.

Cluedo Liars Edition Game is available now and is suitable for ages eight and above.

Watch the full video below: