Play-Doh partnered with Rylan Clark-Neal and a panel of pre-school ‘colour mixing experts’ to identify “Nemesis Grey” as its Colour of The Year. 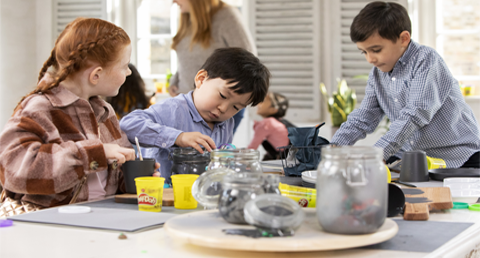 Play-Doh has released a tongue-in-cheek documentary to celebrate its inaugural Colour of the Year – “Nemesis Grey”.

The hilarious three-minute film is hosted by Rylan Clark-Neal and features a pre-school panel of colour ‘experts’ talking about their journey to identify the Play-Doh Colour of the Year 2021. However, Rylan’s quickly discovers that “Nemesis Grey” is created by randomly mixing colours together – a sight that grown-ups are all too familiar with and dread their children doing.

The new Colour of the Year marks the brand celebrating its 65th anniversary and comes as new research reveals a quarter of parents (26%) admit they never let their kids mix up their Play-Doh colours because of the grey colour it creates.

The research found that 53% of parents believe they now spend more time playing with their children than they did before the first lockdown in March. However, it also discovered that 46% of grownups are still reluctant to encourage ‘messy play’, with 1 in 5 adults saying that messy play makes them feel anxious and two in five wishing they ‘could let go more’ when playing with their children.

Louisa Parast, marketing director at Play-Doh UK & Ireland, commented: “In a year when families have done more home crafting than ever before, we know that there is still a hesitance from grown-ups to embrace the messiness of mixing up Play-Doh colours – it’s their nemesis. But as we move into a new year, we’re encouraging parents to embrace Nemesis Grey, not as an enemy, but as a colour that is bursting with their children’s creativity. After all, that’s what Play-Doh as a brand is all about.”

Adults ready to embrace their nemesis and get messy with Play-Doh pots hiding in their cupboards can tune into Play-Doh Presents: Festive mix-along with Rylan Clark-Neal on Sunday 13th December at 10am on the Play-Doh Facebook page. A live workshop for families to follow and make their own creations to celebrate the holiday season.