Exclusive: Sam Muxworthy, ‘The Girl from Aunty’, on setting up an eCommerce business

In this article, Sam describes her experience of setting up Love From Aunty, her first foray into eCommerce.

Following toy buyer roles at The Toy Store, Daisy & Tom and Harrods, Sam Muxworthy has recently returned from a stint in Dubai working as the buying manager for Majid Al Futtaim, operating Lego Certified Stores and American Girl stores across the Middle East. Since then, she has set up a successful online business – Love From Aunty.

“I’ve always struggled with work life balance, regularly being in the office until gone 10pm,” writes Sam. “Converting my living room into a storage facility for my burgeoning online children’s gift shop is not helping with that. Like so many others in retail, my buying career came to a screaming halt this year. I moved to the Cotswolds – that hotbed of head office retail jobs – two weeks before the first lockdown. The job I had lined up pushed the start date to June then ghosted me altogether. I have aggressively stopped following them on Instagram.” 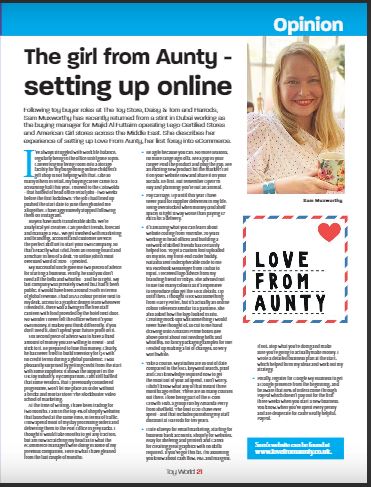 Making use of an ironing board and armchair, Sam pivoted to the eCommerce space using the advice of her successful uncle. Firstly, that you don’t need all the bells and whistles, and secondly, to decide on the amount of money you’re going to invest – and stick to it.

“Clearly, he has never tried to build inventory for Q4 with no credit terms during a global pandemic,” Sam says. “I was pleasantly surprised by getting credit from the start with some suppliers; it shows the support in the UK toy industry. By comparison, I am still baffled that some vendors, that I previously considered progressive, won’t let me place an order without a bricks and mortar store; The Blockbuster Video school of marketing.”

She adds: “At the time of writing, I have been trading for two months. I am in the top 4% of Shopify websites that launched at the same time, in terms of traffic. I now spend most of my day processing orders and delivering them to the Post Office in grey sacks. I thought it would take months to get any traction, but am now scratching my head as to what the eCommerce managers were doing in some of my previous companies.”

To read the rest of Sam’s article, which appeared in the December edition of Toy World and includes the lessons and tips she’s learned over the last few months, click here.