The Elf on the Shelf board game launches for Christmas

The official The Elf on the Shelf Board Game by board game designer Rachel Lowe can be ordered online now. 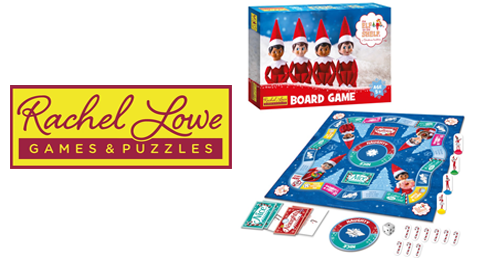 The official The Elf on the Shelf Board Game, by award-winning board game designer Rachel Lowe, can now be ordered online, following a deal secured with The Lumistella Company through the brand’s UK licensing agent, Rocket Licensing.

The game has been released alongside The Elf on the Shelf Snap Card Game depicting Scout Elves.

Rachel Lowe commented: “I love Christmas and I am absolutely delighted to be working with The Elf on the Shelf to create a range of products that any child will love to have this Christmas. Every year parents come up with elaborate and funny activities for their elves which they share on social media. I’m really excited to be able to contribute to this Christmas tradition which is such a big part of families’ festive holidays.”

The Elf on the Shelf Board Game is available alongside Rachel’s current range, including Call the Midwife and WWE: Road to WrestleMania.

The WWE: Road to WrestleMania board game, released in 2019, is available with a 500-piece puzzle and playing cards, allowing WWE fans across the UK to become part of the global pop-cultural event. The products featured WWE Superstars including John Cena, Roman Reigns, Seth Rollins and Becky Lynch, and have been popular with WWE’s passionate fanbase.

The Call the Midwife board game, puzzle and playing cards have continued to be popular in their 3rd year of release. Rachel added: “Call the Midwife is a show with a dedicated following and the new series next year, along with the Christmas special, will be very popular. I will be looking to update the game and puzzle to keep it in line with the new characters and story lines coming in future series.”