The BrainBox series contains addictive memory challenges in which players have 10 seconds to study a card before answering questions on what they saw. 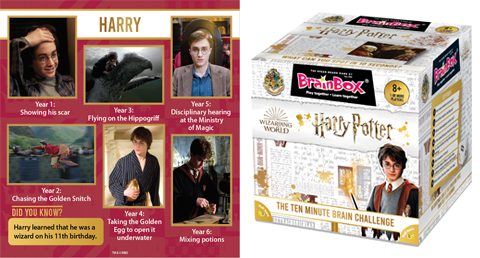 BrainBox, the successful range of 10-minute educational games, is set to expand into the Wizarding World with the upcoming release of BrainBox Harry Potter in May 2021.

The BrainBox series contains addictive memory challenges in which players have 10 seconds to study a card before answering questions on what they saw. Having previously covered topics on everything from maths and English to dinosaurs and football, the family-friendly brand now invites players to re-live the beloved film series.

Cards will be packed with fun facts about the franchise as well as stills from all of the Harry Potter films, offering youngsters the chance to prove that they’ve got what it takes to be top of the class at Hogwarts.

It’s part of a series of plans for the coming year from Green Board Games, the game’s publisher which joined the Asmodee Group in 2019 as Asmodee’s first UK-owned game-design studio.

“2021 is going to be a huge year for BrainBox,” commented James Wallis, studio manager at Green Board Games. “BrainBox Harry Potter is a fantastic way to relaunch the line, followed by a fresh new look for the whole range – including a completely revamped BrainBox Board Game – and the new line of mini-BrainBoxes, in a pocket- and pocket-money-friendly format. We couldn’t be more excited.”

The BrainBox games, which will form a key part of Asmodee’s newly launching Brain Games collection for creative and enquiring minds in 2021, has sold over 8m copies worldwide, in 65 countries and 30 different languages.

The Harry Potter edition, as well as others in the series, will be previewed at AsmoFair, the third edition of Asmodee’s pioneering virtual trade show, from 17th-23rd January. Now including a 360-degree virtual tour of a fully built show stand, the event is an opportunity for retailers to get a closer look at must-have products for the year ahead from Asmodee’s vast range of games and collectibles. Weekend and evening meetings are also available – buyers can head to asmofair.co.uk to book a slot.