With more than two-thirds of the world’s 2b children expected to be living in East Asia by 2032, the company is cementing its physical presence in the region. 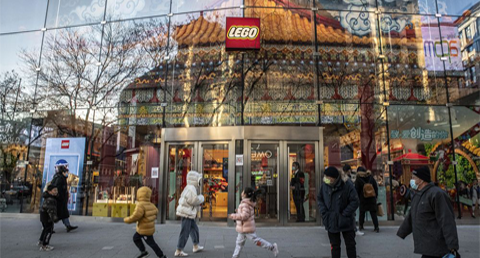 Despite the double threat of the coronavirus pandemic and online competition impacting toy stores in 2020, the Lego Group is investing heavily in brick-and-mortar retailing in China and expanding its store presence across the region. With more than two-thirds of the world’s 2b children expected to be living in East Asia by 2032, the company says it must be physically present in the region. Over the two years ending in December 2021, Lego plans to more than double the number of stores it has in China, to 300 in 85 cities. China is already one of the best performing markets for the group, reporting double-digit growth as the company’s global sales last year rose 6%, to a record $6.3b.

Stores are needed to address the particular challenges of China, says Cindy Chiu, who oversees the company’s retail operations in Asia. Since Lego is a relative newcomer to the region, few Chinese parents played with the bricks as children. Stores give families a chance to experience Lego directly, building a connection with the brand.

Lego is also aggressively expanding online to make it easier for parents to buy the products they see in stores. This year, the company has introduced web initiatives such as extra discounts, a membership programme and special promotions for holidays. In May, the livestreamed launch of a Lego set based on the classic tale, Journey to the West, featuring the mythical Monkey King, drew more than 10m viewers. Lego has 3.9m followers on Tmall, the shopping site owned by Alibaba Group Holding.

To enhance brand recognition, a Legoland theme park is planned in Sichuan province in southwestern China. Merlin Entertainments, the operator of Lego’s parks, started construction at a 24-hectare (59-acre) site with a local partner in June. The park, Lego’s first in the country, will have two new rides exclusive to this location, as well as a Lego-brick depiction of the Great Wall of China and other Chinese landmarks, along with global icons like the Eiffel Tower or Statue of Liberty. The company has an agreement to build a park near Shanghai and says it is also in talks with other partners across China.

Brands such as Gudi, Jiego, and Lepin, all of which feature white-on-red logos with script almost identical to Lego’s, have proved a hurdle and forced the company to take actions in Chinese intellectual-property courts to win damages and apologies from imitators. The legal push has dovetailed with growing concern among consumers about fakes.

However, the company is benefiting from the concerns of families worried about China’s education system, which has been criticised by parents for not fostering creativity and providing children with the skills needed to prosper in the modern economy. Mark Tanner, managing director of China Skinny, a marketing agency in Shanghai, added: “Lego really plays to Chinese parents’ desire to invest in toys and activities to prepare their children for the competitive world.”