Communities work together to provide toys for struggling families this Christmas

Local communities have turned to social media to help those who have not been able to buy presents themselves, while toyshops and suppliers have organised appeals and donations. 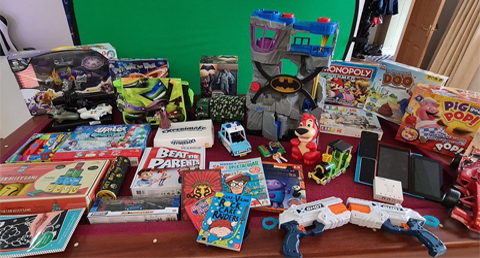 Throughout the British Isles, toy appeals and collections take place every Christmas, to provide toys for less fortunate children. This year, more than ever, such efforts have proved vitally important and, despite the challenges they have faced themselves, toyshops large and small, toy suppliers and many other organisations have been busy collecting and donating stock to help ensure that no child needs to go without at Christmas time.

One of the most high profile initiatives is The Entertainer’s Big Toy Appeal, run in conjunction with the Salvation Army, which encourages customers to donate a toy to a family less fortunate than themselves.

But in most towns, there have been appeals that have been well supported by communities, local toy outlets and toy manufacturers.

The BBC reports that struggling parents in Wales who have been unable to buy Christmas presents for their children this year are being offered help by their local communities, which are reaching out via social media to offer support.

Since Saturday, all non-essential shops in Wales closed once again and aisles in supermarkets with items such as toys have been blocked off. As a result, people turned to social media to offer toys to those who had not been able to buy Christmas presents or do not get paid until later this week.

“It means so much that someone was prepared to help others,” commented one man, who saw the offer to help on social media. “At the beginning of February I was diagnosed with a heart condition and haven’t been able to work since then. I had managed to pick up some books and things for the boys, but the build-up to Christmas was terrifying. You want your children to be able to open their presents on Christmas morning. They see an advert on the TV and they want it – it’s heartbreaking.”

He added that despite benefits payments being brought forward to Christmas Eve, it would come too late. The Facebook posts made him feel as though a weight had been lifted off his shoulders. The toys have been donated by a woman whose sons decided to give away the extra toys they don’t need.

In Cardiff, a group has been set up where people can create wish lists online for people to buy on their behalf. Creator of the Facebook group, Liam Schewitz, said by Monday morning more than 50 wish lists had been created and in excess of 600 presents bought. “When the announcement came through on Saturday that shops were being closed it occurred to me that people haven’t got a lot of money at the moment,” he explained. “The majority of people in the country live month to month. A lot of people’s pay is coming in today or the 23rd. It was about making sure these families who are in that position would not have their Christmas totally ruined.”