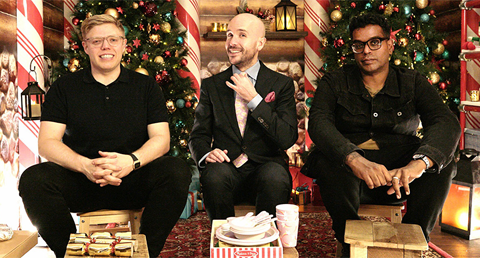 As reported by Toy World in October, One Night In…Hamleys is hitting TV screens this Christmas. The air date has been announced for Thursday 24th December (Christmas Eve) and Channel 4 has now confirmed that the show will see comedians Romesh Ranganathan, Rob Beckett and Tom Allen locked overnight in the world-famous toy shop on London’s Regent Street. With no security guards or grown-ups there to hamper the fun, the three friends can run wild for the night and do all the things they dreamed of doing in a toy shop when they were kids.

The show airs just after Hamleys announced the launch of its first eBay shop, as part of the company’s plans to expand its online presence.

Narrated by comedian, Sarah Millican, the three comics raid the shelves, chat about Christmas, invent games to play and reminisce with festive stories, as they hang out after hours and unsupervised in the fun emporium.

Set rules are; sleeping’s cheating, leave it how you found it, and if they break it, they pay for it. Otherwise, the trio can do anything they like as long as they’re out of the store before the cleaners arrive and the shutters go up the next morning.

One Night In…Hamleys can be watched on Thursday 24th December 2020, on Channel 4 at 9pm.