The auction will close at 3pm on Thursday 23rd January, the last day of Toy Fair. 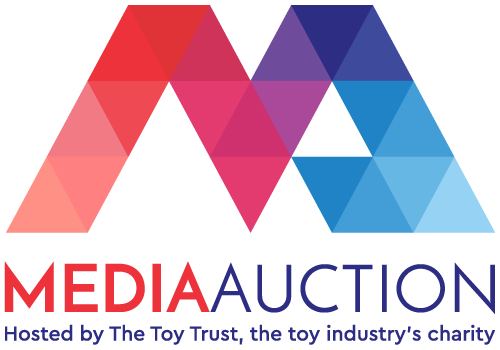 The annual Toy Trust Media Auction is now open. Advance bids are welcome ahead of the auction, which will take place during the Toy Industry Awards night on Tuesday 21st January 2020.

As the second largest fundraising activity for the Toy Trust each year, the annual Media Auction is a classic win, win scenario for all. Not only can members bag themselves a media bargain, but all funds raised go to help the chosen Toy Trust charities during the year. Last year more than £91,000 was raised and with many highly prized lots once again, it is hoped that this year will be just as successful.

Airtime and printed media spots have been donated from leading broadcast, online, print and trade journals, plus major retailers have also added valuable promotional slots in catalogues. The result is a colossal £150,000+ of media space to bid for. Lots have been received from Sky, Disney, Nickelodeon, Turner, CITV, Five (Milkshake), SuperAwesome, Venatus Media, Red Media, Pearl & Dean, Toy World, Toy News, Toys n Playthings, TNP.Media, The Entertainer, Sainsbury’s Argos and Redan Publishing. Details of each can be viewed on the Toy Trust Media Auction page, which will also be updated at intervals with the current highest bids.

Graham Canning, Toy Trust committee chairman, commented: “On behalf of the Toy Trust Committee I’d like to thank all our media partners for their generous donations.  Without them we would not be able to support so many causes that directly benefit children. This annual fundraising activity is a popular part of the Toy Industry Awards night and one that everyone benefits from; we are all looking forward to seeing the results. I’d also like to give special thanks to Arena Azure’s Jeff Taylor for his dedication in helping us creating another superb list to bid for.”

If you would like to make an advance bid for one or more of the Media Auction Lots, which include a sought after online ad on the Toy World website and daily email newsflash bulletin, email Matt@btha.co.uk or bid via the live auction page.