The nationwide poll also revealed that two fifths of adults have been buying nostalgic items over the course of the pandemic, saying it brought them comfort. 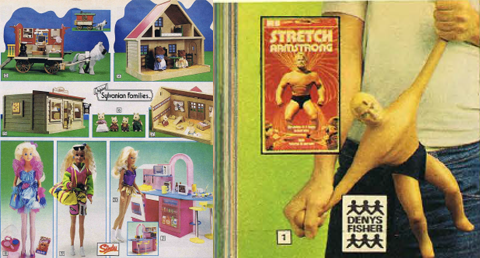 The results of the research, conducted by Censuswide and based on a sample of 2,000 UK adults aged 25-60, comes as searches for “retro” on the Argos website increased by 110% in November, compared to the previous month as the nation entered a second lockdown. The Argos poll also revealed that two fifths of adults have been buying nostalgic items over the course of the pandemic, with 43% saying it brought them comfort.

The new research found that two fifths (38%) have been buying nostalgic items over the course of the pandemic, with two in five (43%) saying it brought them a sense of comfort and 30% wanting some escapism from what’s been a very difficult year. Argos reports that Sega Mega Drive, Mr Frosty and Stretch Armstrong have seen huge upticks in page visits in November, of 324%, 241% and 258% respectively.

Data from the Argos poll also showed that 70 per cent miss how magical Christmas was as a child and 67% think it becomes less exciting as you get older, with 49% even admitting they think it’s unfair that adults miss out on the magic of Christmas. 44% also wish they still believed in Santa Claus.

Argos has made available a selection of the most popular retro presents that are still available today on a website at www.thegiftthatgotaway.co.uk, complete with original catalogue images to offer customers who feel they missed out a blast from the past.

Game Boy topped the list of longed-for gifts, with Mr Frosty and Sega Mega Drive coming in a close second and third. Those now in their 40s were most likely to have put Mr Frosty on their Christmas list, while those currently over 50 wanted a Walkman.

The Top 10 ‘Gifts That Got Away’ are as follows:

Argos will also be spreading festive cheer, surprising some of those who reply to Argos’s dedicated competition tweet using #ArgosChristmasMagic with the gift they missed out on as a child.

Rob Quartermain, senior campaign manager for Argos said: “After a long and difficult year, people need some Christmas magic more than ever. We want to bring some joy to the last weeks of 2020 by surprising people with the gift they always wanted as a child but never received. The memories of not receiving that Barbie, board game or console linger on decades later, so we hope the nostalgic gifts will sprinkle some magic to their festive season.”