As part of an update to existing Asmodee collections, both new additions will be well positioned to respond to consumer needs during another extended period of lockdown measures. 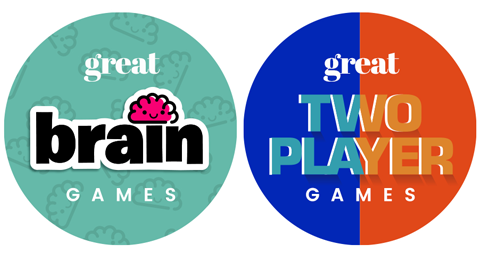 Asmodee holds a firm belief that there is a perfect game for every occasion is reinforced by the launch of two new key ranges: Brain Games and Two-Player Games.

With an enormous catalogue of games across a broad spectrum of genres, the games specialist is making it easier than ever for retailers to discover the ideal products to fit their needs. Each key range highlights a handful of market-leading titles for different audiences, each of which is bolstered by strong marketing support from Asmodee.

The first of the new collections, Brain Games, features products that are perfect for creative and enquiring minds. Each one engages different parts of the mind and all are designed to suit younger players while also offering fun and excitement for adults. Ideal for keeping young minds engaged while stuck at home, the range includes creative storytelling game Rory’s Story Cubes and the brain-teasing memory challenge of the BrainBox series.

Meanwhile, the Two-Player Games range is a great way for couples to unwind after a long day of video meetings or after the kids have gone to bed. From a one-on-one adaptation of the smash-hit word game in Bananagrams Duel to the critically acclaimed spatial challenge of Patchwork, the range is full of products that are perfect companions for lockdown periods.

Brain Games and Two-Player Games stand alongside Asmodee’s existing key ranges, each of which has had its contents updated for the new year. Quick-Play Games spotlights games which are as fast to learn as they are to play, while Modern Classics highlights major products that have driven the 21st-century renaissance in board gaming and continue to lead in sales.

The Family Games range focuses on titles which are perfect for getting players of all ages around the table together for shared fun, while the Party Games range features casual and hilarious games suitable for larger groups.

Each of these ranges can be explored in more detail at the third edition of AsmoFair, Asmodee’s pioneering virtual trade show which offers retailers a chance to get an up-close look at all the major new additions to their catalogue for 2021. Running from 17th-23rd January, the event now features a 360-degree virtual tour of a fully built show stand that brings attendees even closer to the feel of an in-person show. With weekend and evening meeting slots available, retailers can head to asmofair.co.uk for more information or to book a meeting.