Thames & Kosmos has announced that the sell-out game is once more available from the company’s UK warehouse. 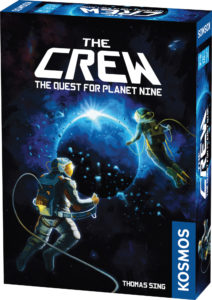 Co-operative strategy game The Crew – Quest for Planet Nine sold out within days when it first hit retail earlier this year. Offering a new twist on a classic trick-taking card game, The Crew struck home with the gaming community, garnering positive reviews from seasoned board gamers and novices alike.

Recently, Thames & Kosmos received further good news; The Crew – Quest for Planet Nine, was the winner in the co-operative game category at the 2019 Golden Geek Awards and was named runner up in the Innovative and Best Card Game categories, which the company says is confirmation that co-operative team-based games are gaining popularity.

The Crew is available now in the UK, and will be available again in the US in a couple weeks.