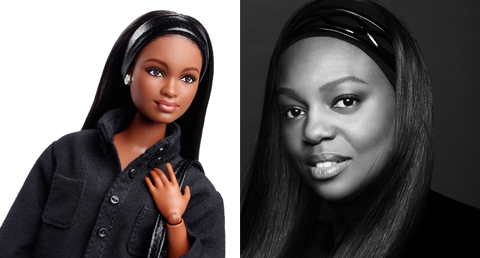 Barbie has announced Dame Pat McGrath DBE as a UK Barbie Role Model by unveiling a one-of-a-kind doll created in her likeness. Pat McGrath is the world’s most influential makeup artist and founder of the billion-dollar beauty brand Pat McGrath Labs. For more than 25 years, her creative vision has made her a tour de force whose legendary and creative power has transformed both beauty and fashion on a global scale.

Pat McGrath commented: “It is an honour having a Barbie in my likeness and I hope it inspires everyone to follow their dreams and believe that with hard work and perseverance, anything is possible. I want my legacy to be one of change and positivity. I am excited that young people might see my doll and believe that a love of makeup and creativity can lead to your dreams coming true.”

Alongside Pat McGrath, the Barbie brand is honouring a raft of female founders from around the world.

Miriam González Durántez said: “I am delighted that Mattel and Inspiring Girls will be working collaboratively to deliver tailored Dream Gap workshops to young girls around the world. Through this exciting global partnership, inspiring role models who work across a range of different sectors, will help raise the aspirations of young girls and empower the next generation of women to be anything they want to be. If she can see it, she can certainly be it.”

Lisa McKnight, senior vice president and global head of Barbie and Dolls, Mattel says “We know that children are inspired by what they see around them, which is why it’s so important for young girls to see themselves reflected in role models who’ve daringly pushed past roadblocks and overcome the Dream Gap to become the brave women they are today. Ahead of International Women’s Day, we’re proud to honour 12 global trailblazing women to help empower the next generation of female leaders by sharing their stories.”

Find out more about the programme at www.Barbie.com/rolemodels.