Dennis Connelly, of Connelly’s Toy Shop, has died at the age of 90. 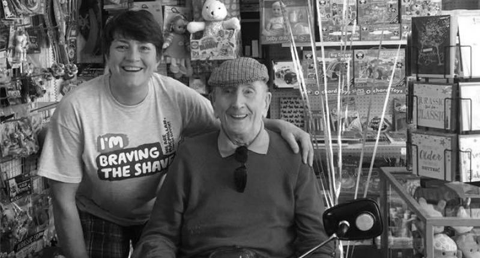 The owner of Barnard Castle’s Connelley’s Toy Shop, Dennis Connelley, has passed away aged 90, prompting an outpouring of condolences from local residents.

According to the Teesdale Mercury, Dennis was born in Jarrow and moved to Barnard Castle in the 1940s after his family home was bombed. There he met his wife, Eileen, and together the couple set up their popular toy shop, then known as Ascough’s Toy Shop. Their daughter Pauline says it was her mum’s idea to change the name of the store to Connelly’s, which it is still called to this day. The couple ran the business together for more than three decades.

Dennis has been remembered as a kind and caring man, a keen fisherman and lover of other sports including badminton, tennis and ping pong. Dennis also set up an archery club in the 50s, which his wife says offered something new and different for him to enjoy. Eileen had been able to spend time with Dennis on his 90th birthday before lockdown and had continued video calls throughout.

Speaking to the Teesdale Mercury, town resident Mark Carter said: “I remember all those years ago, when I went to the infant school at the top of the Demesnes and I used to call into Connelly’s Toy Shop to buy sweets and joke tricks, Top Trumps and other games. Dennis was always so helpful and it’s something I have never forgotten. He really was a true Barnard Castle legend in my eyes, and I’m very sad to hear he will be no longer with us.”

Connelley’s is trading today under the management of Pauline Connelley, who kindly spoke to Toy World for the June edition of Talking Shop. Our thoughts are with the family at this very sad time.