This week, I did something I haven’t done for quite a while: I left my house to visit a shop selling toys, where I stood in the aisles talking with a bunch of people I knew from the toy community. It felt good. It felt… normal.

The store in question was Watford Asda – not hitherto recognised as a hub of the UK toy community, it was chosen as one of the trial stores for which The Entertainer will manage the toy department over the next six months. Since the initial announcement of the project last October, a huge amount of planning has been going on behind the scenes – and this week saw the fruition of that work, as the trial commenced in five Asda stores across the UK. Thankfully, one of those stores was local to me (I’m not sure I would have risked a trip to Pudsey…imagine being stopped by the police and asked if my journey was essential and answering that I was off to look at some toys. That’s a juicy fine right there).

So it was that I met up with some of the good folk from The Entertainer to witness first-hand the fruits of their labour – you can read my thoughts on what I saw here. Suffice to say that I thought the aisles looked impressive, and it will be fascinating to see how the trial goes – indeed, I am sure the whole toy trade will be watching with interest, and not just here in the UK. If the concept proves to be a success, it will open up a whole new world of possibilities for specialist toy chains across the globe – harnessing their knowledge, expertise and contacts to create a presence in stores with guaranteed weekly footfall from its core target audience is a mouth-watering prospect. Blazing a trail indeed…

There were several other good news stories to report this week: Hasbro and Mattel’s Q4 and full year 2020 results were announced, with both companies finishing the year on a high. Hasbro’s Q4 sales were up, but not quite enough to turn the year positive; nevertheless, it was still an impressive performance, and the announcement gave us the eye-catching statistic that Hasbro generated over $1b ecommerce revenue for the first time in 2020, an increase of 43%.

Meanwhile Mattel’s numbers were arguably even more impressive: sales increased in both Q4 and full year, a $200m loss from the previous year was turned into a $126m profit and there were double digit gains in EMEA and North America, the company’s two largest markets. I spoke to Sanjay Luthra about the EMEA performance and he was keen to point out that it was very much the result of the foundational work the company has been putting in place over the past few years, rather than a direct result of short-term pandemic-related purchasing trends. After all, the three biggest growth categories for the toy market in 2020 – Outdoor, Games & Puzzles and Construction – are not where Mattel’s core product focus lies. Barbie attracted most of the headlines, but other core brands such as Hot Wheels and Fisher Price made major contributions to the numbers.

Elsewhere, virtual previews continue apace. Thankfully, no toy person has yet shown up on their screen as a cat (although surely someone must be thinking about it now…), and overall, things have gone remarkably smoothly. Most retail buyers I speak to still tell me how much they miss face to face meetings and previews, but it looks like we need to remain patient for a little while longer. We still don’t know when toy stores and other retailers will open here in the UK, but a lot of fingers are being crossed for an Easter re-opening. Many toy companies are pressing ahead with planned TV campaigns for new lines being launched at Easter, so let’s hope that consumers will be able to visit their local toy stores to see all the new introductions in the flesh. Watching a mother in the aisles of Asda face-timing her child to show them the toys (“Is this the one you want?”) showed how resourceful consumers can be, but nothing beats the hands-on experience and the thrill of a physical toy shop / department.

Looking further ahead towards the summer, all the evidence points to foreign holidays being problematic this year, so another year of staycations looks increasingly likely – and hopefully that will result in more sales for UK toy retailers and more investment in outdoor lines as the back garden becomes the focus once more.

So, as we say goodbye and a not-so-fond farewell to the Year of the Rat and welcome in the Year of the Metal Ox (it’s complicated – google it), let’s hope the traditional interpretation of the Ox’s characteristics is correct: apparently, the ox tends to signify movement, and I am sure that greater freedom to travel is something most of us are looking forward to.

If this was a normal year (and not one where the most exciting thing to happen is a parish council meeting that has made Jackie Weaver this year’s Carole Baskin), I would have been mid-Atlantic today, heading to New York for the final leg of Toy Fair Season. Instead, I have two zoom calls and a bunch of emails and phone calls to round off the week – although just to make me feel nostalgic, it’s just as cold here as it would be in NYC. The New York Toy Fair organisers have instigated a social media campaign this weekend, asking people to share their show memories with the hashtag #ToyFairLife. Look out for some wonderfully evocative photos and reminiscences across all good social media feeds over the next few days.

Until we can all meet in person again, I leave you with this image of toy retailing in 2021. I’m all for helpful shop staff, but this nefarious gang of ruffians appears to be taking customer service into a whole new area: “Give us all your money…and we’ll give you some toys in return.” The one in the middle looks like he might be the ringleader. 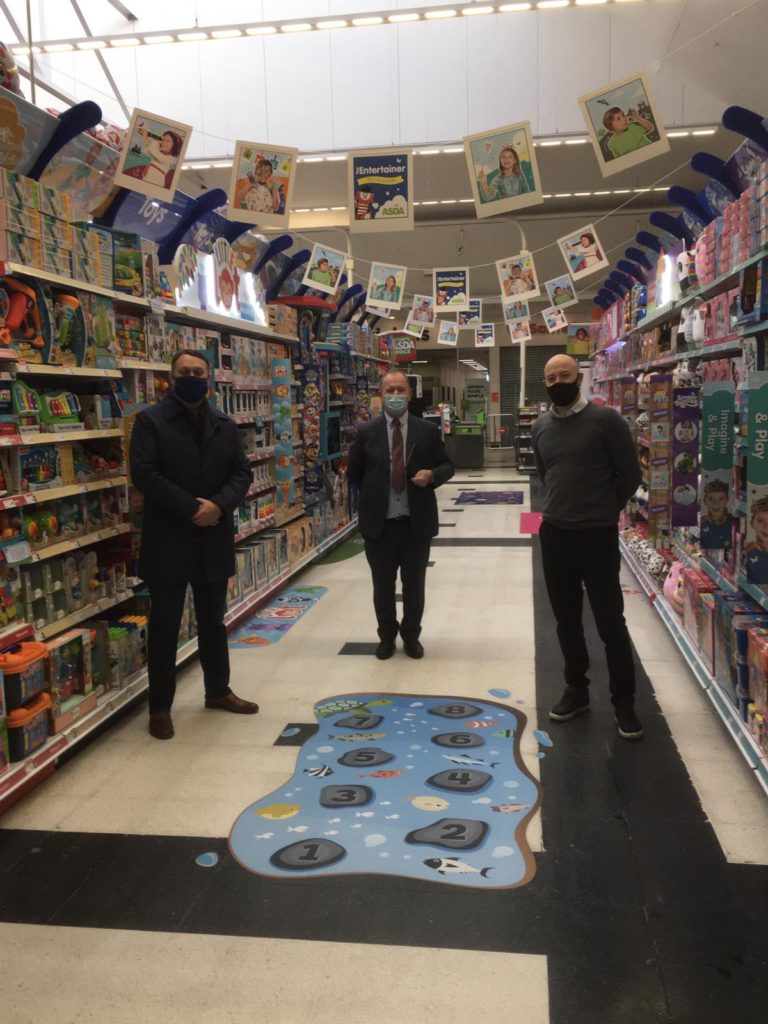