Love Monster enjoyed a successful launch on CBeebies in late January, now multiple international broadcast partners have come on board. 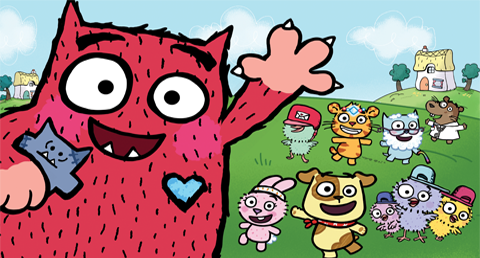 Boat Rocker Studios has announced a raft of TV sales for the new pre-school series, which has also had over 6m iPlayer views to date.

In the 54 x7’ 2D animated series, Love Monster embarks on a series of adventures with his friends in Fluffytown, where, together, they learn all kinds of life lessons. Full of heart and helping pre-schoolers understand different emotions, Love Monster showcases the importance of kindness, empathy, connection and instinct.

Love Monster, is based on the bestselling pre-school books by Rachel Bright, published by HarperCollins Children’s Books. The production is a collaboration between BBC Children’s In-House Productions, Boat Rocker Studios and Chinese kids’ entertainment company UYoung.

Licensees for the property include master toy partner Golden Bear, Amscan for dress up clothing and accessories, Cooneen for nightwear and underwear, Dreamtex for bedding and home textiles, and Blues for daywear and swimwear. The Love Monster ranges are set to be launched from autumn/winter 2020 and spring/summer 2021.

Love Monster is exec produced by Tony Reed for the BBC, Chapman Maddox for Boat Rocker and James Chen Gu for UYoung. The UK share of the animation for the series is produced by Karrot Animation and A Productions, whilst a proportion of pre-production on scripts, storyboards and design is provided by UYoung’s studio in China.

Boat Rocker Studios is managing the global content distribution and consumer products programme for the franchise, excluding China and South East Asia which is managed by UYoung.