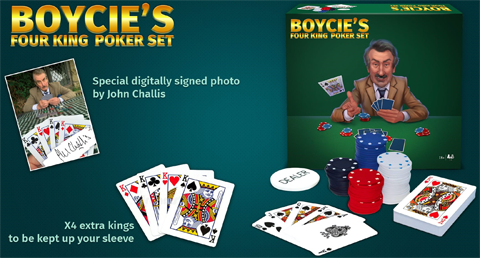 To celebrate the upcoming release of Boycie in Belgrade a special gift has been developed as part of its official merchandise. The new documentary, described as “a must watch for any fan of Only Fools and Horses” will feature John Challis aiming to uncover why the sitcom is the most watched show in Serbia.

Fans of Only Fools and Horses can re-enact the iconic poker scene from the infamous episode Losing Streak, featuring Boycie’s famous line “For Four Kings Sake!” The new, bespoke product is being brought to market by former Winning Moves executive, Lazar Vukovic.

There are only a limited amount planned for production so those interested are advised to pre-order before 23rd August 2020 in time for Christmas delivery.

Boycie in Belgrade is available to purchase on DVD and Blu-ray and is set to be released on the 4th September 2020. All pre-orders will receive a signed copy of the DVD/Blu-ray by John Challis.