The Toy Retailers Association says this year’s picks ‘capture the magic of Christmas’, as The NPD Group reveals a 9% uplift on sales versus 2019. 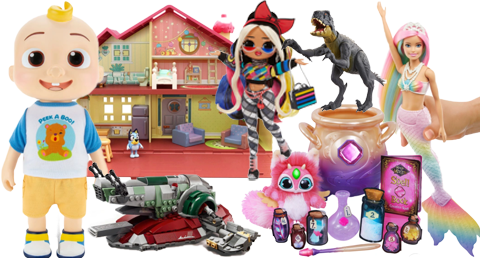 The Toy Retailers Association has announced that the biggest licences from film and TV are the driving force behind this year’s must-have Christmas toys, with Star Wars, Pokémon, Jurassic World and Paw Patrol all making its Top 12 Toys list at DreamToys 2021.

Perennial favourites including Barbie, Hot Wheels and L.O.L. Surprise! also made the list, which the TRA says is the ‘most authoritative list of what will be hot this Christmas’, and is selected by an independent panel of retailers and industry experts.

The Top 12 list is as follows (in alphabetical order):

Gary Grant, founder of The Entertainer and chair of the DreamToys selection committee, said: “This year’s DreamToys list is an exciting blend of evergreen favourites and this year’s biggest brands, which we believe will be the most sought-after under the Christmas tree this festive season. Toys have played such a vital role in family life over the past two years and this Christmas will be no exception. That’s why the industry is working to overcome supply chain challenges to ensure there will be toys on shelves throughout the festive period.”

Alongside the Top 12 list, the TRA released a longer list of 81 toys demonstrating the depth and quality of choice available to consumers this year. The average price of this year’s Top 12 list is £36, it highlighted.

Frederique Tutt, VP – global industry expert, Toys, The NPD Group, said: “Brits have continued their love affair with toys this year and sales have been strong. Compared to 2019, pre-Covid, sales are up 9% for the nine months ending September 2021. We expect the final sales quarter of the year to deliver a solid performance despite supply chain challenges. Toy manufacturers and retailers have planned ahead and stocked up to avoid anticipated shortages, so most toy shoppers will be able to get the items they want. But as we say at the DreamToys event every November – if you know the toy the child in your life is dreaming of this Christmas, it’s best to buy it now.”