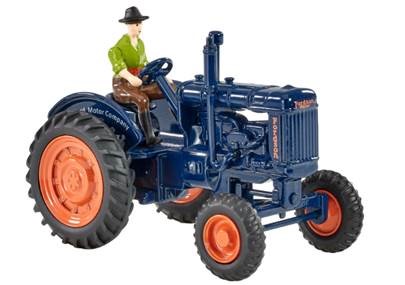 To mark the incredible milestone, Britains is welcoming back its first-ever model tractor, the Fordson Major.

With only 7,500 models in production, the exclusive model will be available from September at selected independent retailers. The model will proudly display the Fordson Major’s signature blue livery and orange wheels with rubber, complete with orange lettering of either side of the nose cone.

Some lucky collectors will be treated to a special surprise, as there are 100 ultra-rare gilded tractors hidden amongst the 7,500. Finished in a gleaming coat of gold paint with a lacquered finish, these have been specially commissioned to celebrate Britains’ 100-year anniversary, making them even more exclusive.

All the tractors are built to Britains’ exacting standards and are supplied in a special centenary box. The precision moulded die-cast metal body is full of detail, from the engine cowling at the front to the tow hitch at the back. The tractor comes with working steering and big-tread tyres, as you would expect from any tractor in the Britains range.

In 1921, the now world-renowned Britains Model Home Farm was launched, in readiness for Christmas, consisting of 30 farm figures and animals. The very first farm vehicle – the ‘4F’ Tumbrel Cart – was introduced at the same time. The first tractor introduced by Britains was the 127F/128F Fordson Major. Launched in 1948, just three years after the real thing, it followed farming trends as tractors started playing an increasingly large role in the day-to-day management of nearly every farm. The Fordson Major stayed in production in that format until 1958.

Mary Wood, general manager UK & Ireland said: “We are so pleased to be able to produce this exciting range for our devoted supporters and offer the surprise of an extra exclusive gold edition. It’s the perfect way to celebrate 100 years of Britains Farm Toys and, at the same time, give something unique and ultra-collectable back to our core fans. From collectors to farming families, our core fans have played with Britains farm products across many generations and are the reason we’re leading the way in agricultural toys. This really exciting and poignant launch is our way of saying thank you for everyone’s ongoing support.”

Designed with the loyal collector in mind, Britains’ range is built to last and is suitable for children aged 3+.