The Golden Teddy awards were presented during the Toymaster evening party on Tuesday this week and at a special event in Central London for BTHA Technical experts. 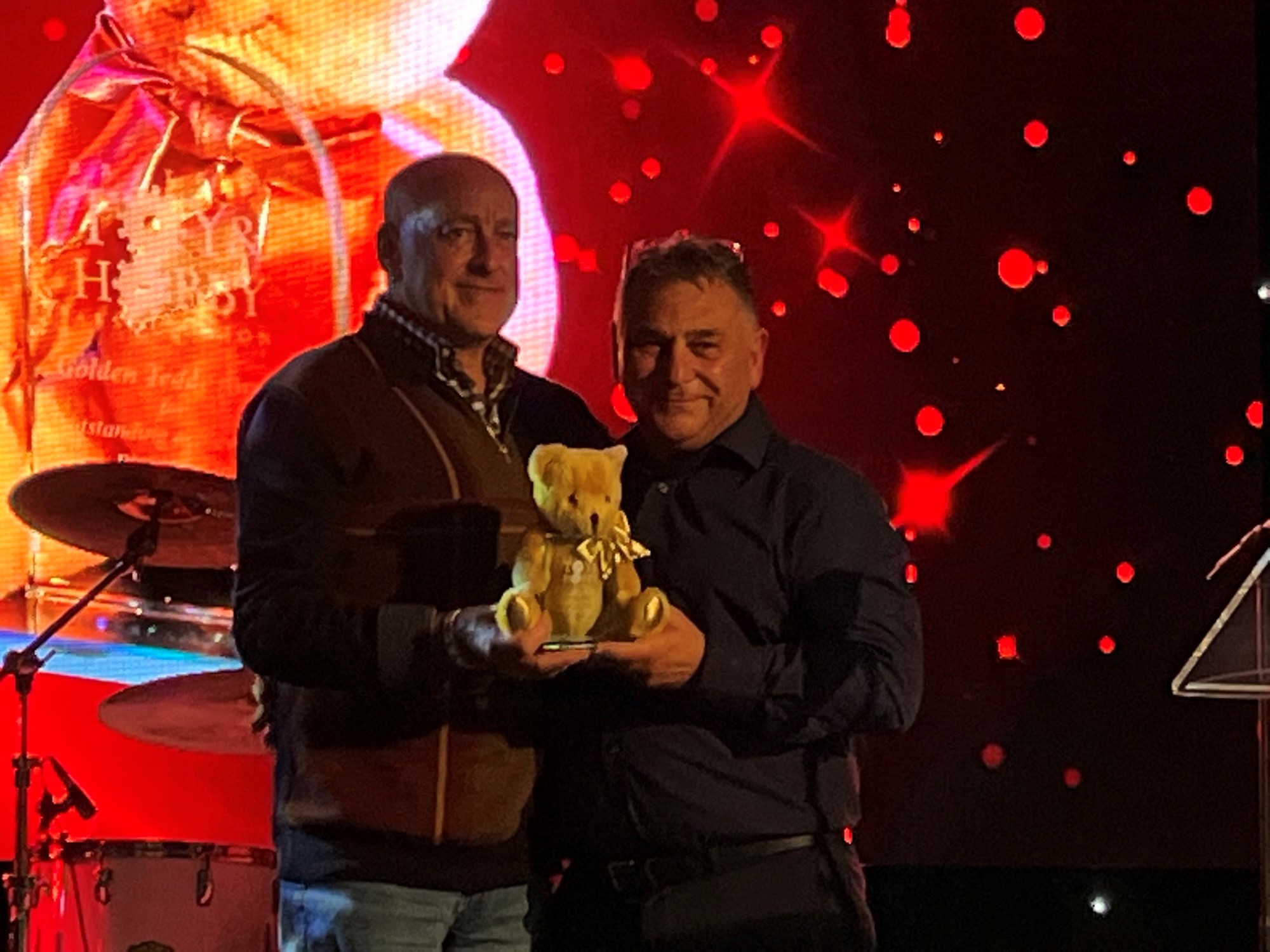 Russel Lipman is presented his Teddy by Paul Reader

The BTHA is pleased to announce that Golden Teddy Awards have been presented to six exceptional individuals representing a number of areas across the industry, all of whom have contributed considerably to the industry over many years.

Golden Teddy Awards were presented to Russell Lipman of Wilton Bradley and Paul Wright of Mashal Toy Agencies at the Toymaster Show in Harrogate.

Nominated by his colleagues at Wilton Bradley, where he has worked for the past twelve years as an area sales manager, Russell Lipman’s nomination for the prestigious accolade described him as: “one of the most genuine people you will ever meet, a gentleman in every aspect of the word, honest, reliable and most of all a true friend to everyone in his life.” 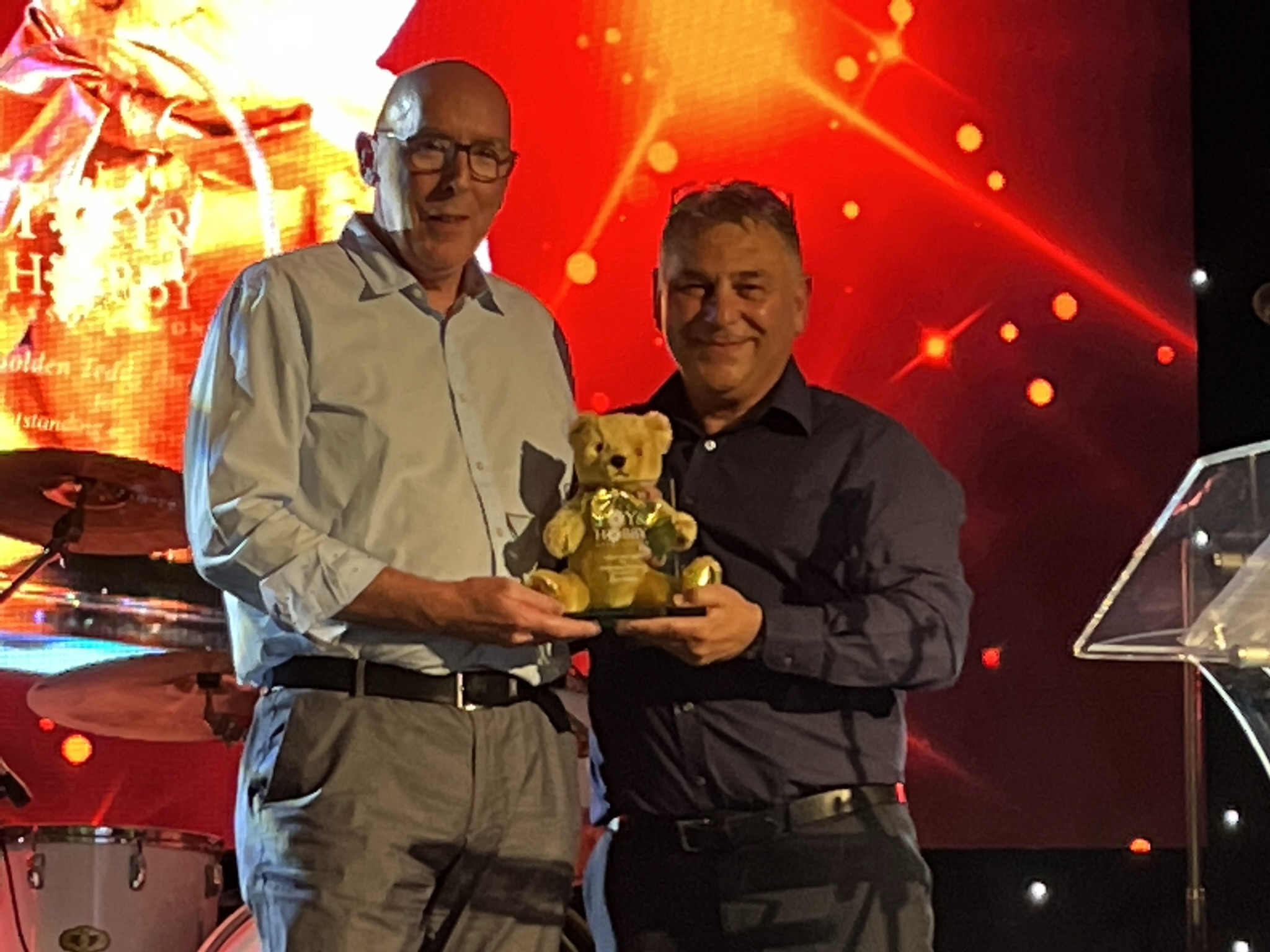 As well as his distinguished career at Wilton Bradley, Russell has held sales positions at a number of companies over the years. These include stints at One For Fun (formerly H Grossman), Class Act Accessories, Rainbow Designs, Hasbro, Coleco UK, Pedigree Toys and Mattel.

“Nothing is ever too much trouble for Russell, he goes about his job diligently and without ever a mutter of a fuss,” said friend and co-worker, Mike Gascoigne. “He is a humble and unassuming man with a heart of gold, and the Golden Teddy award is the icing on the cake for such an incredible commitment to our industry.”

Irish agent Paul Wright was also presented with a Golden Teddy for his many years of service to the toy trade. Paul was described by his proposers as: “honest, reliable and delivers a great service to his customers.”

Paul is celebrating over 30 years in the toy trade, where he has worked as an agent to Irish toy retailers, going above and beyond to offer personal advice, expertise and support to his customers. One of his co-workers added: “It’s a true pleasure to work with Paul, he is totally trustworthy and a perfect work colleague.” 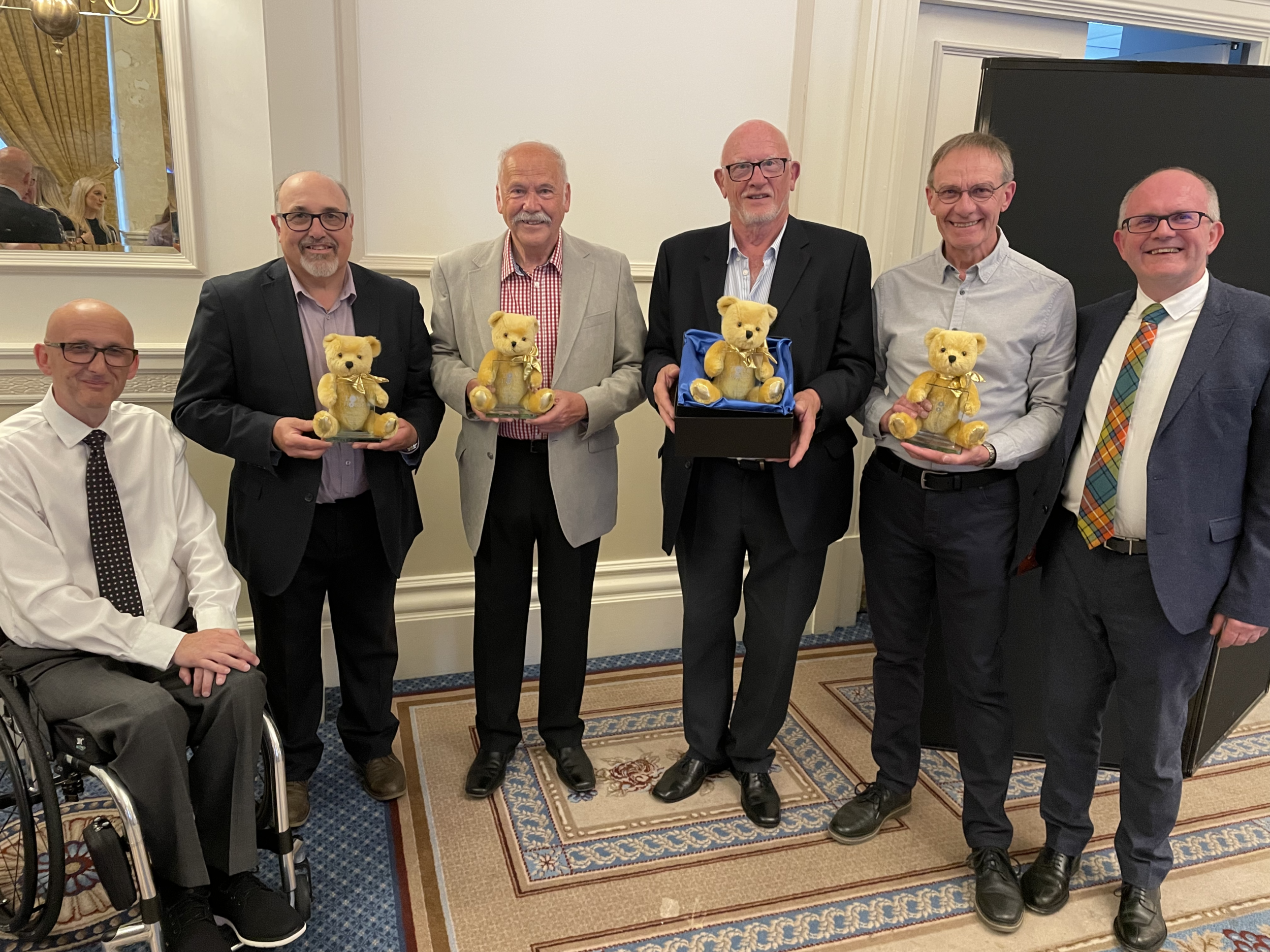 A further four Golden Teddies were handed out to Mike Coe (BTHA sustainability consultant), Michael Ives (Mamas and Papas), David Bolton (British Retail Consortium) and Malcolm Horner (Bureau Veritas) at a special event in Central London for BTHA Technical experts. As part of their award presentations, reasons cited included loyal membership of the BTHA Technical Committee, trustworthiness within their companies, people of great standing and all revered by their peers and colleagues alike.

Golden Teddies are awarded to nominated candidates who have served the industry for more than 15 years, and are designed to recognise ordinary people with extraordinary talents, people who go over and above expectations and who are the industry’s ‘genuinely nice people’.

Graham Canning, chairman of the British Toy & Hobby Association said: “On behalf of us all at the British Toy & Hobby Association, my congratulations go to all our very worthy Golden Teddy Award winners for their loyal and substantial individual contributions to the industry over many years. Our winners represent all that is good about this fantastic industry – dedication, integrity and going over and above expectations. My congratulations once again to them all.”

Toy World would like to congratulate all the recipients.

You can read more about BTHA Golden Teddies here.