The US toy retailer, which offers ‘family experiences’, says it plans to double its store count every year. 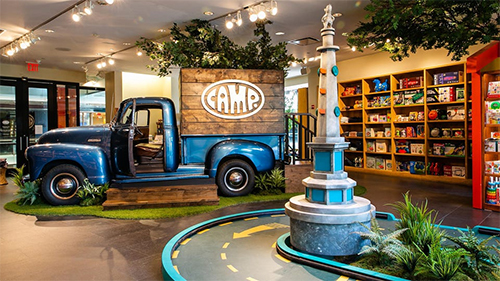 Experiential retailer Camp has opened its seventh store in the previous Toys R Us premises in Paramus, New Jersey, one of the US East Coast’s largest malls.

The company, which aims to reinvent toy retailing, is continuing its expansion push and says the new location in Westfield Garden State Plaza could play a key role in accelerating Camp’s expansion to other parts of the country. The store opens tomorrow (19th October).

According to Forbes, the 6,500sq ft space will be one of Camp’s newer formats, a store that is more retail, and less experiential, compared to the flagship Camp store on Fifth Avenue, but will still have plenty of hands-on activities that have made Camp a hit with parents and kids. It has a treehouse and slide in the centre of the space, and a vintage pickup truck in the entrance that children can play on.

Camp is taking over the site of one of the reimagined, next-generation Toys R Us stores. The company that owns the rights to the Toys R Us name opened two stores – one at Garden State Plaza and one in The Galleria in Houston – in autumn 2019 but they were closed permanently at the beginning of this year, although the new owner of the Toys R Us brand is promising an eventual return to retail stores.

Camp co-founder and CEO Ben Kaufman said the Paramus store won’t have a “magic door” that revolves to reveal a play space, or themes that change seasonally, but if the location is successful it could be converted into a full-size format in the future.

“We’re hoping that’s what happens here, that this is kind of a test towards a bigger space in that location,” he said.

“There will be experiences throughout, with play built into all of the shopping moments,” Ben said, but unlike the flagship stores it will not have rotating themed experiences like Travel Camp, Cooking Camp or Cosmic Camp.

The Westfield Garden State Plaza location is Camp’s seventh store, and two additional stores, one in Los Angeles and one in New England, are scheduled to open before the end of the year. Camp opened its first store, in the Flatiron district of New York City, in December 2018, and opened four more stores in late 2019.

From the start, Ben Kaufman, a former chief marketing officer at Buzzfeed, and Camp has been particularly savvy about brand partnerships. Last summer, it joined with Walmart WMT +0.5% to create Camp by Walmart – a virtual summer camp with 100-plus videos featuring arts and crafts, fitness, and other camp activities with celebrity counsellors including LeBron James, Drew Barrymore and Neil Patrick Harris.

Camp executives prefer to describe the company as a “family experiences” business or “retail media company” rather than a toy store. At the original New York City store, paid activities typically generate the bulk of the revenue. Camp says is hoping to double its store count each year.