Casdon Toys’ Roger Howard retires after 45 years with the company

From office junior to head of UK sales, Roger spent all of his working life with the Blackpool headquartered toy company. 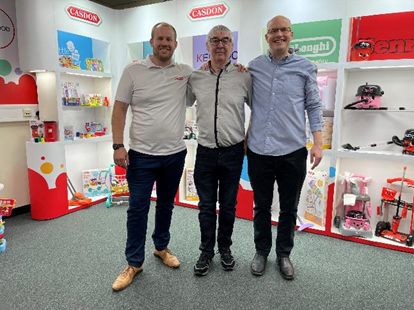 Roger joined the team at Blackpool-headquartered Casdon as an office junior in July 1976, aged just 16, and just a few years later was put in charge of the warehouse and sales office. He has been heading up UK sales since 2000 and has had a rich record at the business – seeing it grow from a UK operation to the international business it is today.

As Toy World reported last week, Casdon Toys celebrates its 75th anniversary this month. Launched on 8th June 1946 by Thomas Cassidy, the company is well-known for its range of best-selling role-play toys.

Becoming an extended part of the Cassidy family along the path of his career, Roger said he has many fond memories of his time with Casdon: “I have had 45 amazing years at Casdon, experiencing some fantastic times from my very first Toy Fair as sales manager, to travelling the world with the job. I have worked with some great people past and present and have watched the company change and grow over the years. I’ve built up some great relationships with both customers and fellow workers and would like to wish all at Casdon the very best for future success.”

Speaking about his retirement, Roger said he was looking forward to getting away on a sunny holiday, once restrictions allow, and enjoying the relaxation.

Phil Cassidy, managing director of Casdon, said: “I would like to take this opportunity to thank Roger so much for his unrelenting commitment and loyalty to Casdon for 45 years. Not many people can say they started a job at 16 and have continued to work in the same business right through to retirement. This is an achievement he should be very proud of. Roger’s hard work over four decades has been instrumental to Casdon’s continued success and we thank him so much for this. He was not only a great employee he has become a friend and family member.”