China currently has no classification system for animation, and there have been calls for a rating system similar to other countries. 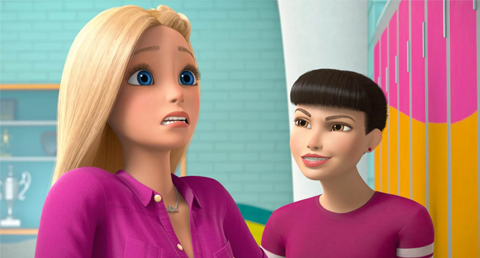 Many western animation studios and brand owners have identified the Chinese market as offering great potential for expansion, but recent developments have highlighted that significant cultural differences remain, which may present a challenge and even a potential barrier to entry. For example, plotlines and scenes which would seem mild and totally innocuous to western eyes, or even harmless content such as ‘exaggerated facial expressions’ and ‘gloomy, thrilling or suspenseful scenes’ have drawn criticism from some Chinese consumer groups.

The Jiangsu Consumer Council in eastern China has released a list of 21 cartoon series which it said contained behaviour and language it claimed were inappropriate for children. Eight of the series are from overseas including Peppa Pig, Barbie Dreamhouse Adventures and My Little Pony, with five others from Japan, such as Detective Conan.

Officials spent three months preparing the report, by watching all the series, before identifying 1,465 ‘problematic points’ and conducting an online survey of 1,026 parents, and face-to-face interviews with parents and teachers from primary schools and kindergartens.

Highlighting a need for content studios to be fully aware of differing cultural sensitivities around the world, the report identified 687 issues with language, 176 issues with story plots and 416 about specific scenes involving actions “that send out messages going against the mainland society’s mainstream values”.

One-fifth of the parents and teachers interviewed face-to-face said children would often imitate actions they saw in the cartoons, such as physical fights. The investigation cited as examples a scene from My Little Pony , where a character dips itself in lava, and scenes from Barbie Dreamhouse Adventures of characters hanging from a helicopter. Another scene saw Peppa Pig character Daddy Pig opening the door of a plane and falling from the aircraft.

The report claimed it found a total of 123 “gloomy, thrilling and suspenseful” scenes, as well as scenes that depicted exaggerated facial expressions of characters when frightened.

Boonie Bears, a Chinese animation work, received the highest number of complaints from parents. It is accused of having the main character often hold an electric saw, leading many children to use a saw to hurt others, the report claimed.

The council said around 70% of parents they spoke with said their children had copied behaviour shown in the programmes that were dangerous and, in some cases, violent. More than 80% of the parents surveyed said they believed it was necessary for the government to tighten censorship of cartoons.

China currently has no classification system for animations, and Li Chuan, a law professor from Southeast University in Nanjing, believes there should be a rating system similar to other countries.

The report has sparked heated discussion on social media, with opinion severely divided on just how problematic such scenes actually are.