The container port in eastern China’s marine hub Ningbo was said to have 28 vessels queuing outside on Wednesday. 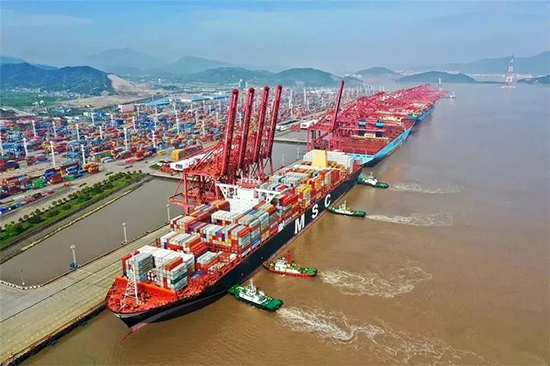 The Ningbo port shut down immediately after a member of staff tested positive for Covid-19 on 10th August, according to a port official who was speaking at a press briefing.

Ningbo Meidong Container Terminal Corp, a subsidiary of Ningbo Zhoushan Port Company Ltd, also suspended all inbound and lift-off services from 03:30 a.m. local time on Wednesday, when twenty-eight container vessels were reported to be queuing outside the port.

Ningbo Zhoushan port, China’s second-largest container port by handling volume after Shanghai, handled 18.68m twenty-foot equivalent units (TEU) in the first seven months, up 17.1% year on year. The port did not disclose separate data for Meidong, where containers at China-Europe, China-Middle East and the Ocean Alliance lines are handled.

The employee who tested positive at Meidong port had received two doses of the Covid-19 vaccine in January and March this year, according to an official from the Ningbo city government. Preliminary checks suggest that it is an asymptomatic infection, however the port awaits a decision on when it will reopen.

This is not the first hurdle the Ningbo port has faced this summer, as this latest shutdown closely follows the area being affected by a typhoon which hit ports in eastern China in late July.

Earlier this year, shipping lines were subject to major disruptions following the Evergreen Suez Canal incident and the closure of Yantian container port. On each occasion, shipping service rapidly deteriorated, with significant delays and vessel and container shortages swiftly following. In turn, this forced prices to sky-high levels. Forwarding companies Toy World has recently been speaking to have indicated that it is entirely plausible that container prices and surcharges could climb even higher should there be any further disruption. In particular, there were concerns that Covid-related incidents in China could exacerbate an already fragile situation, leading to further delays, equipment shortages and price rises.

Key concerns will be how long will the closure last and more cases being found at other terminals resulting a wider scale shutdown of facilities at the Ningbo port. There are also much wider fears for the supply chain if the current outbreak continues to spread, with China having already put restrictions in place in a growing number of locations including Zhengzhou, Nanjing, Beijing, Wuhan, Yantai and Shanghai.

Further disruptions at ports would come at a critical time for container shipping and the supply chain as the sector moves into it peak season. As Seatrade Maritime News has reported, delays between China and Europe and North America have been growing to 7.5 – 8.5 days on average on key China – Europe port pairs. Meanwhile the US West Coast ports of Los Angeles and Long Beach have seen congestion rising again with over 30 ships waiting at anchor to berth there.

In the case of this latest closure, the world will be watching closely to see how long it lasts and what knock-on effects may ensue. One freight forwarder told The Loadstar: “If the port closure is a long one, then knock-on effects will be felt, as the other terminals in Ningbo can’t fully absorb a longer closure of Meishan. This would be similar to what we saw in Shenzhen when Yantian was closed – other terminals did their utmost to compensate, but could not take up the full lost capacity.”

The ports of Shanghai and Ningbo were already heavily congested, following the impact of typhoon In-Fa last month, potential delays caused by increased Covid testing for port workers and restrictions on vessel crew changes. Even before the closure of Ningbo, there were said to be around 140 container ships waiting outside the two ports. This latest development could further exacerbate the congestion situation, just as shipping companies head into peak season.

Seatrade Maritime News believes that if more major Chinese terminals stop operations due to Covid outbreaks, it could lead to the worst disruption the sector has seen since the start of the pandemic.