Confusion over sale of non-essential goods in Wales

As supermarkets face confusion over sales of non-essential items including toys during lockdown, Welsh government promises to review policy. 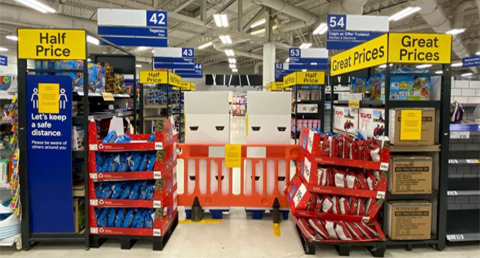 With most high-street shops forced to close as Wales undergoes a 17-day “firebreak” lockdown, the Welsh government has instructed supermarkets not to sell non-essential items. Aisles containing items such as toys and games have been covered over or blocked off. The rationale is that it would be unfair to take sales from retailers forced to shutter, and that not offering such items will encourage customers to keep shopping trips for essential goods, such as food and medicines, short.

Clothes, toys, electrical goods, games and garden items have been deemed ‘non-essential’, as have utensils, crockery, furniture, bedding or decorative items for the home.

Although politicians have pointed out that the restriction is only temporary and for a relatively short time, the move will be especially damaging to the sale of Halloween ranges in supermarkets, which cannot be mothballed for the duration of the lockdown like other goods.

However, supermarket bosses have complained it is unclear exactly what is included in the ban. A tweet from the government further fuelled debate over what can and cannot be put on sale, reading: “Supermarkets can keep selling items you can find in other essential shops – such as stationery/greeting cards.”

A spokesperson for Asda in Coryton, Cardiff said the supermarket had been given “little time to implement these changes or clarity on what is deemed ‘essential'” and had “expressed our deep concerns about the implications for customers accessing products they genuinely need”.

The Welsh Retail Consortium said: “In spite of the dearth of government clarity, our members’ focus now will be on equipping hard-working colleagues with as much information as possible given the undoubted uncertainty and complexity that has been caused by this decision.”

The Welsh first minister, Mark Drakeford, said that the measure was “a simple matter of fair play”. He stated: “We are requiring many hundreds of small businesses to close on the high street right across Wales. We cannot do that and then allow supermarkets to sell goods that those people are unable to sell. This is not the time to be browsing around supermarkets looking for non-essential goods.”

The opposition health spokesperson, Andrew RT Davies, objected to the decision, saying: “Who are they to determine what is essential? That varies by individual and should not be a decision taken by the state. It’s power-crazed nonsense.” Conservative leader Paul Davies called for the return of the Welsh Parliament to discuss the matter: “This is absolute madness by the Welsh Government, preventing people from buying the products which they want to buy. This is forcing them to purchase online or to make extra journeys to multiple shops searching for them.”

Following the political opposition, criticism from retailers and a widely supported public petition, the policy is to be reviewed almost immediately. The first minister said the Welsh government would ensure that “common sense is applied”, and inferred that there is some discretion in the rules for shops to sell non-essential items in certain circumstances. In a statement, the government said: “The fire-break is designed to reduce all physical contact between households to an absolute minimum in order to slow the spread of coronavirus and save lives. The basic decision is the right one. If the implementation of it, the interpretation of it, needs to be revisited to make sure the rules are sensible, then we will do that.”

Exclusive: Gary and Duncan Grant on The Entertainer’s partnership projects

12,000 jobs at risk as Debenhams stores set to close