In England, the use of face masks has been subject to debate, with mixed messages from the government. 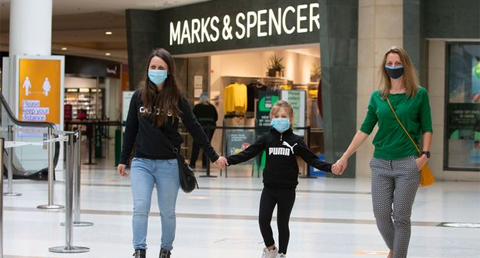 As previously reported, the government announced that customers must wear masks or face coverings in shops and supermarkets from July 24th. However, adding to the confusion over how the new rules are to be enforced, it has not been made clear whether they must also be worn inside shopping centres, leaving centre management teams unsure whether to enforce the new measures.

Intu Lakeside has said that it is waiting for clarity from the government around wearing face masks and coverings inside their premises. In a statement, Intu Lakeside said: “At the moment we are following government guidelines and doing as we are meant to. We are awaiting some more clarity in regards to the new rules of wearing face masks and seeing what will be announced as to whether it is mandatory for face masks to be worn throughout the whole of the centre, or if they will just have to be worn within each of the individual stores. Once we have had this clarity from the government then we will know what we will have to do to put measures in place.”

The shopping centre, which has already introduced a host of safety initiatives, hopes to update visitors before July 24th, when the new guidelines come into effect.

Bluewater Shopping Centre, near Dartford, has made it clear that customers will be expected to wear masks while inside the centre’s many retailers, and says that shoppers are “encouraged” to wear one in public places, including the galleries inside the shopping mall. The centre management has said that members of Bluewater’s security team, the shopping centre’s ‘social distancing champions’ and its dedicated Kent Police team would be on hand to assist visitors with these issues.

Bluewater has also introduced additional health and safety measures to ensure that both shoppers and staff will be safe when visiting and working in the centre.

Robert Goodman, senior centre director at Bluewater, said: “Safety of our staff and guests is our number one priority and we continue to be guided by government advice. Visitors will be required to wear face covering in shops and are strongly encouraged to wear one in all public places.”

A poll published in the Observer showed that 71% of adults in England supported the decision to make face coverings mandatory in shops.

Professor Sir Ian Diamond, the head of the Office for National Statistics told Sky News that 61% of the population had already been using face coverings in the last week: “What we are showing is that week on week there is an increase in the number of people who are using face coverings – that’s up from 50% the week before.”

He added that face coverings were becoming “the norm” in many parts of society, especially in Scotland, where face coverings in shops were made mandatory earlier this month.

In Wales. the government has advised retailers: “Although, we do not intend to mandate the use of face coverings in retail settings, we advise that you may consider it appropriate or necessary to ask your customers to wear a face covering.”