The congestion has reached the stage where the port’s management is seriously considering turning ships away. 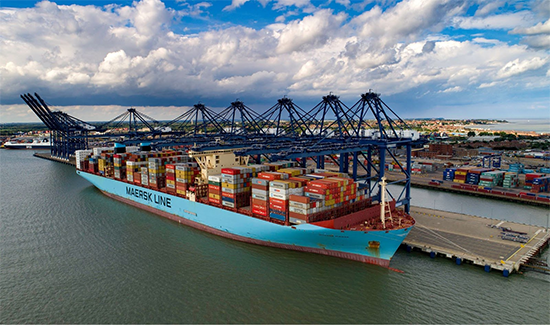 With only 10 weeks until Christmas, the UK’s largest container port Felixstowe is struggling to cope with the volume of cargo arriving. Reports suggest that the site has become severely congested, due in part to a shortage of HGV drivers. The port’s management is said to be attempting to take action to improve the flow of traffic, but is now considering turning vessels away unless the situation improves.

It has been suggested that the average shipping container arriving at Felixstowe is spending more than nine days at the port before it is collected – double the average ‘dwell time’ for import containers in 2020. In the last week of September, the average wait time was higher than at any point last year, including during November 2020 when the port last experienced severe congestion.

Felixstowe is handling similar import volumes to 2019, but is currently importing more containers that it is able to transport out by rail and road. Businesses and freight trade associations blame the problems at Felixstowe on a shortage of HGV drivers, which has led to a significant fall in the number of container collections. In addition, labour shortages at the port are hampering efforts to unload and reload ships.

Hauliers operating at Felixstowe have had to downsize due to a shortage of drivers. They estimate the number of container collections in September was down 15-20% on normal, which resulted in up to 7,500 containers stacking up at the port. Felixstowe has even exceeded its “empty storage capacity” for shipping lines and now has almost 50,000 empty containers on the terminal.

The port has been forced to impose controls on the number of empty containers it accepts. Last week, numerous shipping companies had empty containers turned away from Felixstowe. They were transported on to other UK ports, including Liverpool, Teesport, Port of Tyne and Tilbury. However, import volume levels are still growing and the port is telling its customers that it has reached capacity. As a result, management is considering slowing the flow of imports by turning vessels away if the situation doesn’t improve.

Toy World has also learned that there are similar problems at ports in Southampton and London. Hauliers are being tasked to take the empty containers to Newcastle, which they are understandably reluctant to do. In addition, this situation is causing major issues with demurrage – rent for the containers sat in the dock. Demurrage rates have skyrocketed this year, putting further pressure on suppliers and retailers bringing product into the UK.

Government minister Oliver Dowden has appeared on Sky News this morning claiming the situation at Felixstowe is improving, suggesting: “I’m confident that people will be able to get their toys for Christmas. I would say just buy as you do normally”.

Meanwhile Maersk admitted it is re-routing at least one 80,000-tonne container ship per week from Felixstowe to unload elsewhere in Europe. Smaller vessels are then to be used to get deliveries bound for the UK to Felixstowe or another port, because smaller berths currently have greater capacity for incoming goods.

A spokesperson for the Felixstowe port has also attempted to play down the problems, claiming :”The situation is improving and there is more spare space for import containers this week than at any time since the beginning of July, when supply chain impacts first started to bite.”