Dobble and GOSH to partner on new charity campaign

The partnership will also support play-themed initiatives led by the charity. 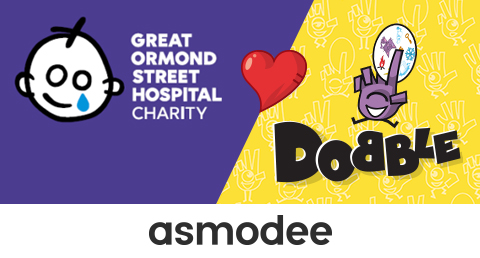 Asmodee has announced a new partnership with Great Ormond Street Hospital Children’s Charity (GOSH Charity) that will raise funds to support seriously ill children from across the UK.

As well as working together closely on projects to introduce children to the social and developmental benefits of playing games, Asmodee has commissioned a special edition of Dobble in support of GOSH Charity – the charity’s famous teardrop child’s face logo has been added as one of the images on the cards. Dobble is the UK’s biggest-selling game of 2018 and 2019, according to NPD’s year-end data, and the GOSH Charity branded edition will be sold in specialist channels, with a contribution received by the charity from each copy sold. This will see a guaranteed minimum of £50,000 raised over the first year of the partnership.

The money donated by Asmodee from the sales of the GOSH Charity-branded edition of Dobble could help fund pioneering medical research, state-of-the-art equipment, support services for children and families, and the vital rebuilding and refurbishment of the hospital’s buildings. Asmodee and GOSH Charity will also be showing how important play is for children’s development, and will work together on events at the hospital, such as the GOSH Careers Festival, when it is safe for them to take place.

“We’re delighted to begin the partnership between Dobble and GOSH Charity,” said Alex Green, Asmodee’s managing director. “After meeting the GOSH Charity team, it was clear that there were a number of shared values between us, including how play can make a real difference to children’s happiness and wellbeing. Through our partnership with GOSH Charity, we will be able to bring smiles to some of the most in-need children in the country, while at the same time raising a tremendous sum for the hospital.”

Chris Carter, head of partnership development at GOSH Charity, added: “We are delighted to be launching this exciting new partnership with Asmodee and look forward to the special GOSH Charity branded Dobble hitting the market in time for Christmas this year. This is a brilliant opportunity for us to raise much needed funds for Great Ormond Street Hospital, at a time when the hospital needs the support of the charity and its supporters more than ever before.”