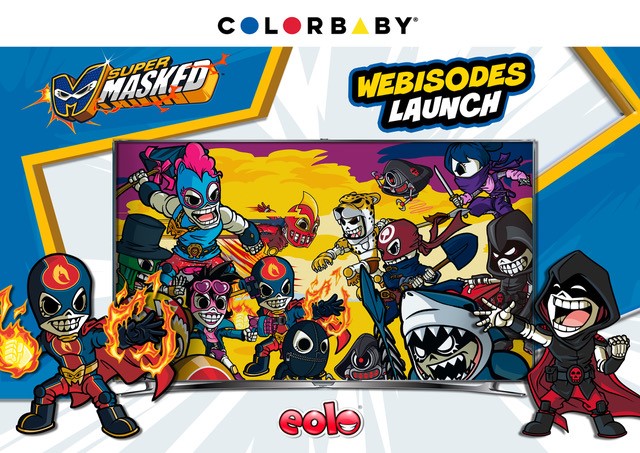 Eolo Toys is launching its most ambitious brand to date for the second half of 2022: the Supermasked Stretch Tech Figures.

A combination of stretchy figures with sounds and sensors characterised by a series of villains and superheroes, the collectibles are targeted at boys and girls aged five years and up. With a cool design, the product range is super fun and attractive with characters such as Whispers, Big Pony and Xa Man. Complementing the toy is a fight game app, where kids can continue being connected to the SuperMasked Universe and characters.

The company has developed a 360º marketing strategy around the property, where content plays a key role. Colorbaby, Eolo Toy’s partner in Spain and Portugal, launched the Supermasked animated series on 24th June and the Spanish distribution company has an agreement to release the Supermasked series on the digital platforms of the kids’ most-watched channel in Spain, Clan TV.

The series is based on a funny heroes vs. villains concept, full of hilarious situations, with the superheroes not knowing how to use their super powers at all. The Supermasked series will be broadcasted online, on YouTube and across different kids’ TV Channels. In addition, influencers’ campaigns focused on delivering high-quality content for kids to consume on different social media platforms are being developed with different distributors in key markets.

Retailers and distributors have shown great enthusiasm for the property and orders from countries including Israel, Germany, Bulgaria, The Netherlands, and the Nordics have been already confirmed. Due to its success, Eolo Toys is permanently investing in new developments for the Supermasked property that will be revealed in the next few months.

Laura Atorrasagasti, Eolo Toys marketing manager, commented: “As we all know, sales of licensed toys are at their highest since 2008, based on new NPD data. It is a reality that the licensing toys market is projected to grow and technology has played a crucial role here. By adapting to today’s kid’s needs, offering them a 360º property gives us a privileged place in the toy market.”

She added: “There is a huge potential in producing toys that can be sold under copyrighted animation and video game characters, that’s why this project comes with all the assets needed to be a success: an animated series, an app game, and the stretchy figure. Of course, all this will be accompanied by social media buzz: influencer campaigns, and organic content posted on the social media official account @supermasked_en and the YouTube channel: trackatoon, in addition to other marketing actions planned in several territories.”