Exclusive: 2020 toy sales in Spain saved by the Three Kings

In an exclusive Viewpoint column, Sol Ostrovsky and Lorenzo de Benito discuss the toy market in Spain over the last year. 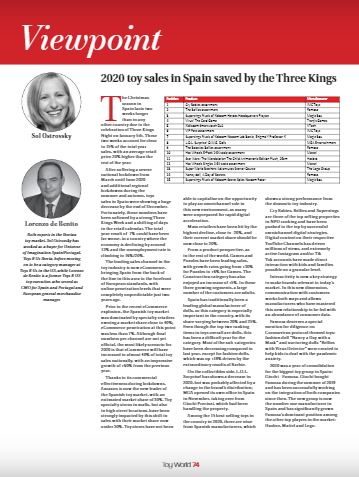 Both experts in the Iberian toy market, Sol Ostrovsky has worked as a buyer for Universe of Imagination Spain/Portugal, Toys R Us Iberia, before moving on to be a category manager at Toys R Us in the US, while Lorenzo de Benito is a former Toys R US top executive, who served as CMO for Spain and Portugal and European general merchandise manager.

Sol and Lorenzo begin by pointing out that the Christmas season in Spain lasts two weeks longer than in any other country due to the celebration of Three Kings Night on January 5th. These two weeks account for close to 15% of the total year sales, with an average retail price 20% higher than the rest of the year.

After suffering a severe national lockdown from March until June 2020 and additional regional lockdowns during the summer and autumn, toys sales in Spain were showing a huge decrease by the end of December. Fortunately, those numbers have been softened by a strong Three Kings Week and a shifting of days in the retail calendar. The total year result of -7% could have been far worse, in a country where the economy is declining by around 12% and the unemployment rate is climbing to 16%/20%.

Sol and Lorenzo explain how the leading sales channel in the toy industry is now eCommerce, bringing Spain from the back of the line in this area to the forefront of European standards, with online penetration levels that were completely unpredictable just two years ago, and detail just how the channel has grown.

They share the product categories that have been leading sales, and how the Spanish toy market has changed over the last year, also considering how the role of different kinds of retailers in the toy market of the future may now develop.

To read the full article, which appeared in the March edition of Toy World, click here.