In the November issue of Toy World, we take a look at the new ranges and line extensions launching early in 2022. 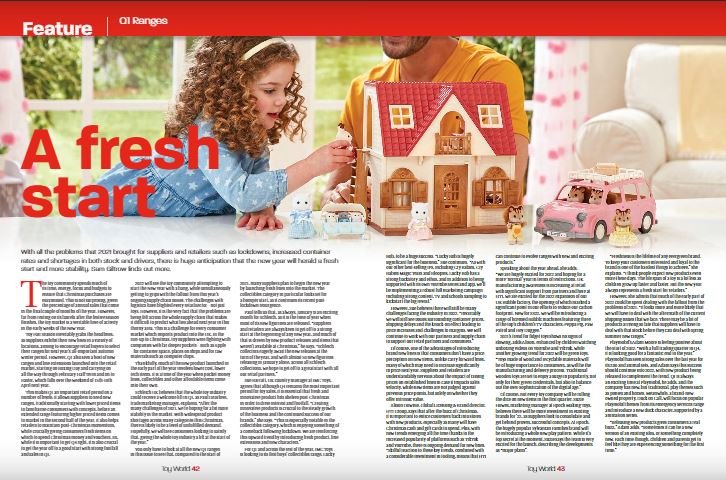 Far from resting on its laurels after the festive season finishes, the toy market is a veritable hive of activity in the early weeks of the New Year.

Q1 will see a host of new ranges and line extensions launched, starting on Boxing Day and carrying on all the way through February Half Term and on to Easter. This makes Q1 an important retail period on a number of levels: it allows suppliers to seed new ranges, traditionally starting with lower priced items to familiarise consumers with concepts, before an extended range featuring higher priced items comes to market in the second half of the year. It also helps retailers to maintain post-Christmas momentum, while crucially giving consumers fresh items on which to spend Christmas money and vouchers.

Schleich UK’s Paul Dearlove is feeling positive about 2022: “With widespread product shortages across many categories this Christmas, there is likely to be a level of unfulfilled demand. Hopefully, we will see consumers looking to satisfy that, giving the whole toy industry a lift at the start of the year.”

The collectibles category in particular looks set for a bumper start, as it continues its recent post-lockdown resurgence, and Sue Barratt told us that IMC is well prepared with multiple new introductions. “We are reinforcing this upward trend by introducing fresh product, line extensions and new characters,” she explained, detailing IMC’s first foray into boys’ collectibles.

At HTI, Alison Downie believes that, after Christmas, it is important to entice customers back into stores with new products, especially as many will have Christmas cash and gift cards to spend. “We are hugely excited for 2022,” she told us. “We will be introducing a new range of licensed Bubblz machines featuring top children’s TV characters, just one example of our many new developments.”

Suzie Howes at Epoch Making Toys believes another stategy for suppliers is to get behind proven, successful concepts for their 2022 ranges, hinting at “major plans” for the Sylvanian Families brand. Playmobil’s Adam Moore agrees, telling us how the company is developing new product to complement current trends. “Releasing new products gives consumers a real buzz,” he added. “Sometimes it can be a new version of an existing idea, or something completely new.”

Although the early part of 2022 could be spent dealing with the fallout from the problems of 2021, the new Q1 ranges in this issue look set to inject a welcome air of positivity into the market.

To read the full feature, which appeared in the November edition of Toy World, plus listings of the latest Q1 releases, click here.