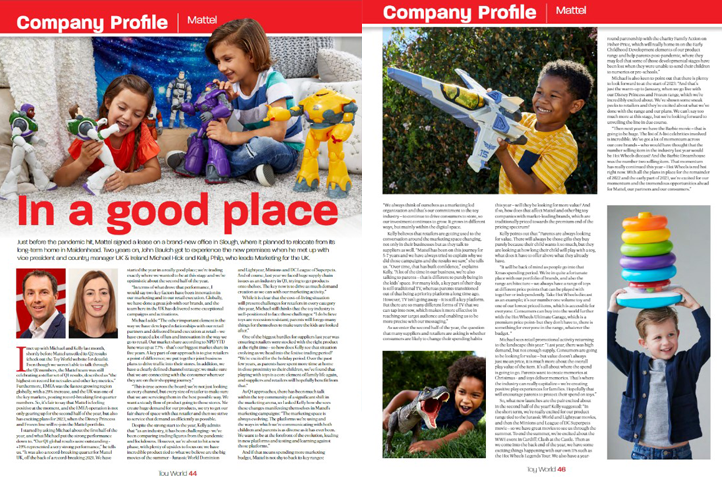 John met up with Michael and Kelly last month, shortly before Mattel unveiled its Q2 results. The Mattel team was still celebrating a stellar set of Q1 results, described as “the highest on record for net sales and other key metrics.” EMEA was the fastest growing region globally, with a 29% increase, and the UK was one of the key markets, posting record-breaking first quarter numbers. It’s fair to say that Mattel is feeling positive at the moment.

Michael notes: “We have started the year in a really good place; we’re trading exactly where we wanted to be at this stage and we’re optimistic about the second half of the year.”

Despite the strong start to the year, Kelly admits that: “as an industry, it has been challenging. However, we’re about to hit a new phase, with plenty of upsides to focus on. We have incredible product tied to the big movies of the summer – Jurassic World Dominion and Lightyear, Minions and DC League of Superpets.”

The question that many are asking is whether consumers are likely to change their spending habits. Kelly points out that “We’re in quite a fortunate place with our portfolio of brands, and also the range architecture – we always have a range of toys at different price points that can be played with together or independently.”

Michael adds: “Consumers are going to be looking for value – but value doesn’t always just mean price, it is much more about the overall play value of the item. Parents want to create memories at Christmas – and toys deliver memories. Hopefully that will encourage parents to protect their spend on toys.”

The article details what new launches the pair are excited about in the second half of the year, with collections supporting a raft of blockbuster movies featuring prominently alongside high consumer awareness for WWE from the Clash at the Castle event in Cardiff and for own IPs thanks to the Hot Wheels Legends Tour and a Fisher-Price activation.

In 2023, Disney Princess and Frozen ranges will go live, the Barbie movie will be released and Hot Wheels is expected to continue its current popularity. Michael concludes: “With all the plans in place for the remainder of 2022 and the early part of 2023, we’re excited for our momentum and the tremendous opportunities ahead for Mattel, our partners and our consumers.”

To read the full article, which appeared in the August edition of Toy World, click here.

Look out for a special Mattel Licensing section in the September edition of Toy World.