Toy World spoke to Richard about his new role at HTI and how the company’s licensing strategy continues to evolve with him at the helm. 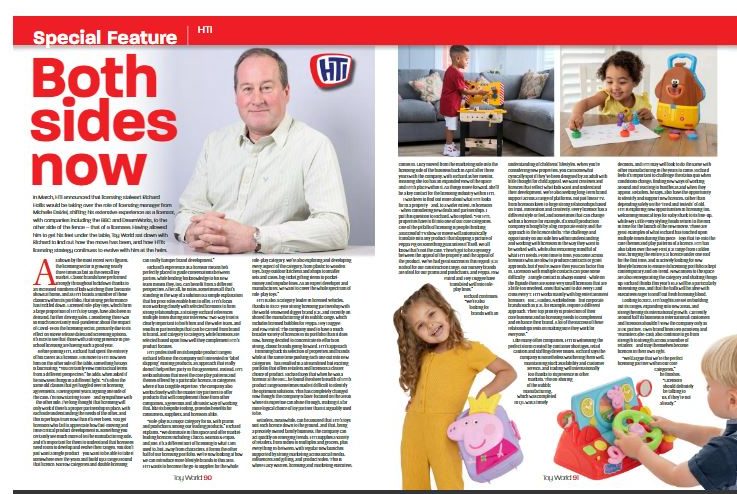 In March, HTI announced that licensing stalwart Richard Hollis would be taking over the role of licensing manager from Michelle Dalziel, shifting his extensive experience as a licensor, with companies including the BBC and DreamWorks, to the other side of the fence – that of a licensee.

Before joining HTI, Richard had spent the entirety of his career as a licensor. His move to HTI now sees him on the other side of the table. “You certainly view contractual terms from a different perspective,” he said, when asked if he now sees things in a different light. “It’s often the same old clauses that get haggled over in licensing agreements. Having spent years arguing one side of the case, I’m now starting to see – and sympathise with – the other side.”

Richard’s experience as a licensor means he’s perfectly placed to guide conversations between parties, while lending his knowledge to his new team means they, too, can benefit from a different perspective.

HTI’s approach – trimming back its selection of properties and brands while at the same time pushing each one out into new categories – has resulted in a streamlined but exciting portfolio that offers retailers and licensors a clearer choice of product.

Richard told us more about the bespoke product ranges on which HTI prides itself, enjoying particular success in the pre-school, role play and licensed vehicles categories, and explained what he looks for in a licensed property, and how the team can act quickly on emerging trends.

As the company continues to explore new opportunities in licensing, to ensure its licensing portfolio is kept contemporary and on-trend, HTI’s sights are set on building out its ranges, expanding into new areas, and strengthening its international growth.

“We’d argue that we’re the perfect licensing partner within our core categories,” he finishes. “Licensors should definitely be talking to us, if they’re not already.”

To read more of Richard’s words of wisdom in the full article, which appeared in the October edition of Toy World, click here.