Mark Hunt, marketing director, talks to Toy World about the launch of GooZonians and why he believes it will replicate the success of Heroes of Goo Jit Zu. 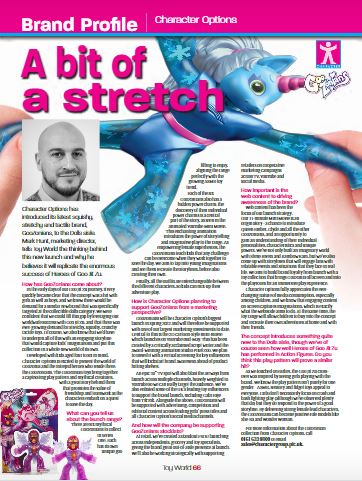 Character Options has introduced its latest squishy, stretchy and tactile brand, GooZonians, to the Dolls aisle. Mark tells us how, in the early days of the Goo Jit Zu journey, it very quickly became clear that the concept was a hit with girls as well as boys. “We knew there would be demand for a similar new brand that was specifically targeted at the collectible dolls category,” he explains. “We were confident that we could fill this gap by leveraging our worldwide success with Goo Jit Zu, and that there was ever-growing demand for stretchy, squishy, crunchy tactile toys. Of course, we also knew that we’d have to underpin all of this with an engaging storyline that would capture kids’ imaginations and put this collection in a whole new world of its own.”

Developed with kids aged four to six in mind, GooZonian toys bring together a captivating play pattern and mythical creatures, with a great story behind them that promotes the value of friendship and teamwork as the characters embark on a quest to save the day.

Mark tells us that the Goo Jit Zu crossover was inspired by seeing girls playing with the brand. “We know the play pattern isn’t purely for one gender – ASMR, sensory and fidget toys appeal to everyone,” he says. “Girls don’t necessarily focus on crash and bash fighting play (although we’ve observed plenty that do) but they do respond to the power of a good storyline. By delivering strong female lead characters, the GooZonians can become positive role models like She-Ra and Wonder Woman.”

With six GooZonians to collect in Series One, the range aligns perfectly with the growing ASMR toy trend and is complemented by an animated YouTube Mini Movie. “As empowering female superheroes, the GooZonians teach kids that any challenge can be overcome when they work together to save the day,” adds Mark. “We aim to tap into young imaginations and see them recreate the storylines, before also creating their own.”

To find out more about the web content driving awareness of the brand, how Character Options will support GooZonians from a marketing perspective and how the company will be supporting GooZonians stockists, read the full article, which appeared in the May edition of Toy World, by clicking here.

For more information about the GooZonian collection from Character Options, call 0161 633 9800 or email sales@charactergroup.plc.uk.