Exclusive: Clash at the Castle set to boost WWE success

Almost a $1b global brand at retail, WWE is a heavyweight licence, and set to get even bigger with the staging of the first UK stadium show in 30 years. 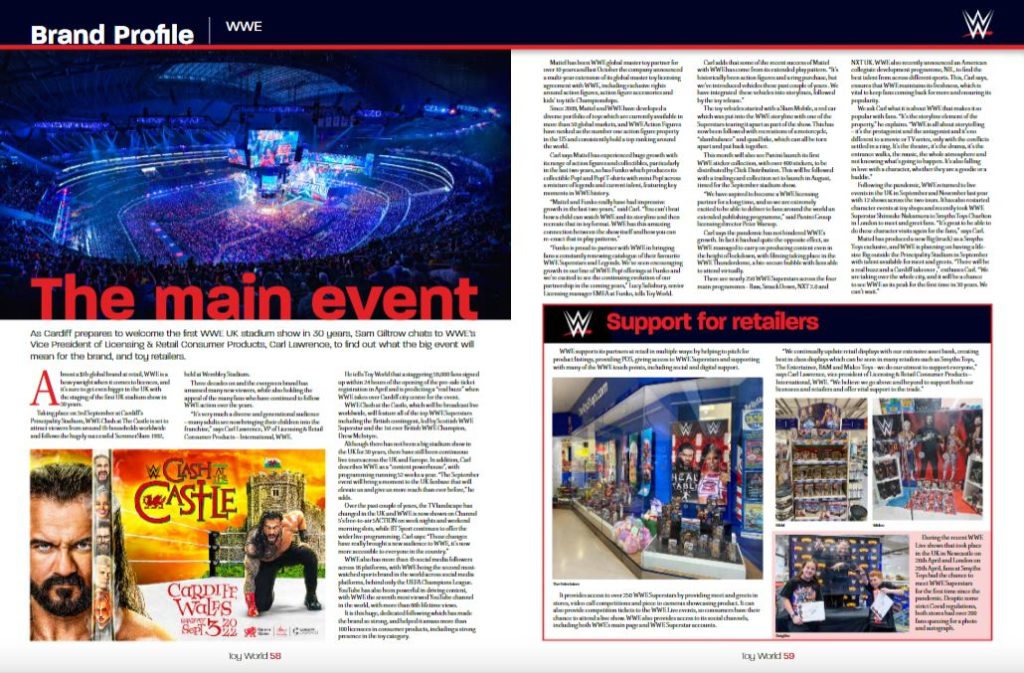 Sam Giltrow chats to WWE’s vice president of Licensing & Retail Consumer Products, Carl Lawrence, to find out what the big event will mean for the brand, and toy retailers.

Michael Hick, vice president and general manager for Mattel, which has enjoyed a rich and long-standing relationship with WWE since 2009, also tells us about the partnership’s diverse and exciting portfolio of toys, which is seeing strong year on year growth.

Taking place on 3rd September at Cardiff’s Principality Stadium, WWE Clash at The Castle is set to attract viewers from around 1b households worldwide and follows the hugely successful SummerSlam 1992, held at Wembley Stadium. Three decades on and the evergreen brand has amassed many new viewers, while also holding the appeal of the many fans who have continued to follow WWE action over the years.

“It’s very much a diverse and generational audience – many adults are now bringing their children into the franchise,” says Carl Lawrence. He tells Toy World that a staggering 59,000 fans signed up within 24 hours of the opening of the pre-sale ticket registration in April and is predicting a “real buzz” when WWE takes over Cardiff city centre for the event.

Michael Hick explains: “We are really excited about the upcoming WWE Clash at the Castle stadium event in Cardiff. This is a fantastic way to connect with the WWE Universe, and the excitement that the event brings for the brand is a great opportunity for retailers to get behind the WWE toy range. We will be creating best in class retail activities to take advantage of this moment with our retail partners.”

There’s more on the extended Mattel ranges, as well as collections from Funko and Panini, plus details of the support available to retailers from WWE in the full article, which appeared in the June edition of Toy World, here.