Rachael Simpson-Jones spoke to Phil Cassidy, MD at Casdon, as well as the Joseph brothers themselves – Antony and Richard – to find out more. 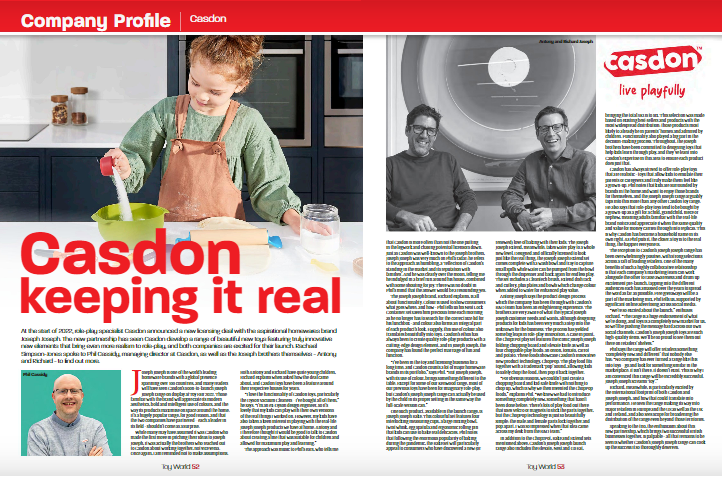 At the start of 2022, role-play specialist Casdon announced a new licensing deal with the aspirational homewares brand Joseph Joseph. The new partnership has seen Casdon develop a range of beautiful new toys featuring truly innovative new elements that bring even more realism to role-play, and both companies are excited for their launch.

Joseph Joseph is one of the world’s leading homeware brands with a global presence spanning over 100 countries, and many readers will have seen Casdon’s soon-to-launch Joseph Joseph range on display at Toy Fair 2022. Those familiar with the brand will appreciate its modern aesthetics, bold and intelligent use of colours, and the way its products maximise on space around the home. It’s a hugely popular range, for good reason, and that the two companies have partnered – each a leader in its field – shouldn’t come as a surprise.

While many may have assumed it was Casdon who made the first move in pitching their ideas to Joseph Joseph, it was actually the brothers who reached out to Casdon about working together, not vice versa.

Richard Joseph explains how the deal came about: “I love the functionality of Casdon toys, particularly the Dyson Vacuum Cleaners. I’m an ex-Dyson design engineer, so it’s lovely that my kids can play with their own versions of the real things I worked on. However, my kids have also taken a keen interest in playing with the real-life Joseph Joseph products we have at home. Antony and I therefore thought it would be good to talk to Casdon about creating a line that was suitable for children and allowed for maximum play and learning.”

“I’ve been in the toy and licensing business for a long time, and Casdon counts a lot of major homeware brands in its portfolio,” Phil Cassidy tells us. “But Joseph Joseph, with its use of colour, brings something different to the table. Casdon’s Joseph Joseph range can actually be used by the child in its proper setting in the same way the full-scale version can.”

To find out more about the partnership, and the new range, read the full article, which appeared in our July edition, here.