Exclusive: Play and display at Playmobil

Adam Higginson, display assistant at Playmobil, talks to Sam Giltrow about his 20 years of bringing the company’s models to life and supporting retailers with eye-catching campaigns. 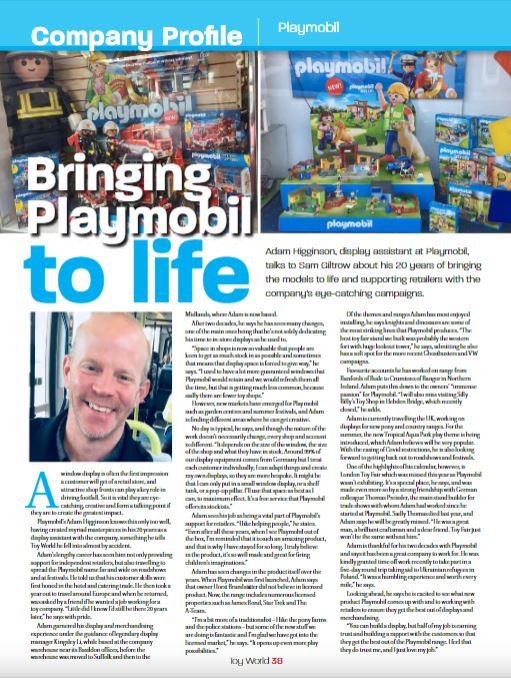 Adam Higginson’s lengthy career has seen him not only providing support for independent retailers, but also travelling to spread the Playmobil name far and wide on roadshows and at festivals.

Adam garnered his display and merchandising experience under the guidance of legendary display manager Kingsley Li, while based at the company warehouse near its Basildon offices, before the warehouse was moved to Suffolk and then to the Midlands, where Adam is now based.

After two decades, he says he has seen many changes, one of the main ones being that he’s not solely dedicating his time to in-store displays as he used to.

However, new markets have emerged for Playmobil such as garden centres and summer festivals, and Adam is finding different areas where he can get creative.

He sees his job as being a vital part of Playmobil’s support for retailers. “I like helping people,” he states. “Even after all these years, when I see Playmobil out of the box, I’m reminded that it is such an amazing product, and that is why I have stayed for so long. I truly believe in the product, it’s so well made and great for firing children’s imaginations.”

Looking ahead, he says he is excited to see what new product Playmobil comes up with and to working with retailers to ensure they get the best out of displays and merchandising.

Adam concludes: “You can build a display, but half of my job is earning trust and building a rapport with the customers so that they get the best out of the Playmobil range. I feel that they do trust me, and I just love my job.”

To read the full interview, which appeared in the May edition of Toy World, click here.