Exclusive: Construction toys – Look what I made…

The construction category experienced a boom during the past year and manufacturers and retailers are hoping to build on that momentum. Sam Giltrow finds out more. 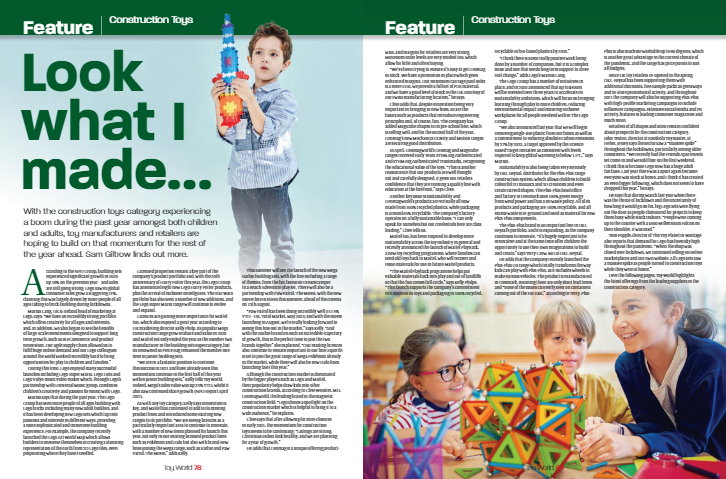 According to the NPD Group, building sets experienced significant growth in 2020 – up 18% on the previous year – and sales are still going strong. Lego saw its global consumer sales grow a staggering 21%, claiming this was largely driven by more people of all ages taking to brick-building during lockdowns.

Marius Lang, UK & Ireland head of marketing at Lego, told us that during the past year, The Lego Group has seen more people of all ages building with Lego bricks including many new adult builders, and it has been developing new Lego sets which tap into passions and interests in different ways, providing a more sophisticated and immersive building experience.

Licensed properties remain a key part of Lego’s product portfolio, an area which is also gaining importance at Mattel. UK marketing director Kelly Philp told us: “We are seeing licences as a particularly important area to continue to innovate, with a number of new items planned for launch this year, not only in our existing licensed product lines such as Pokémon and Halo but also with brand-new lines joining the Mega range, such as Barbie and Paw Patrol: The Movie.”

Clive says that after allowing for store closures in early 2021, the momentum for construction toys seems to be continuing: “Listings are strong, Christmas orders look healthy, and we are planning for a year of growth.”

Geomag, Lego and Mattel are all investing heavily in sustainability initiatives and we explore the steps each company is taking in the full article. Sustainability is also being taken very seriously by DKL Beysal, distributor for the Plus-Plus construction system. The Plus-Plus head office and factory in Denmark uses 100% green energy from wind power and has a no waste policy. All of its products and packaging are 100% recyclable, and all excess waste is re-ground and used as material for new Plus-Plus components.

Retailers remain confident about prospects for the category. John Testori of Bambola Toymaster in Jersey says the sector saw a “massive spike” throughout the lockdowns, particularly among older consumers. “Lego now has a huge adult fan base. Last year there was a spurt again because everyone was stuck at home, and I think it has created an even bigger following, which does not seem to have dropped this year,” he says.

To read the full feature from our July issue, which also highlights the latest offerings from the leading suppliers in the construction category, click here.