Everything from video gaming, anime and even NFTs is helping to push characters in the Action Figures & Collectibles market to the fore, as Sam Giltrow discovers. 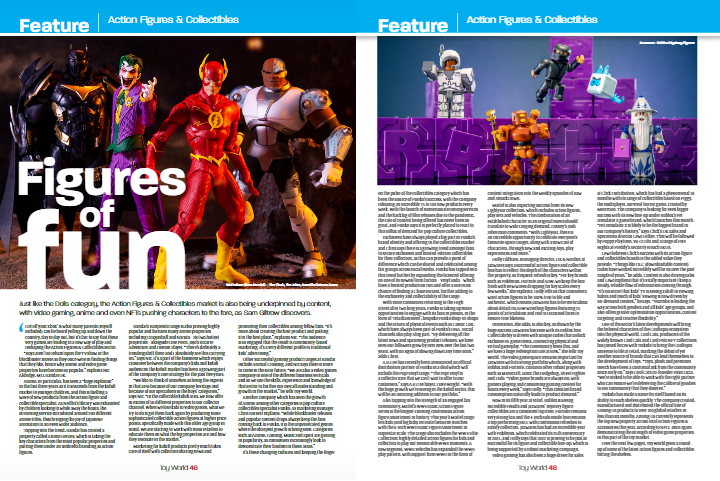 ‘Get off your Xbox’ is what many parents (myself included) can be heard yelling up and down the country, but it’s fair to say that these very games are leading to a new way of play and reshaping the Action Figures & Collectibles sector. “Boys aren’t so reliant upon the TV show or the blockbuster movie as they once were in finding things that they like, hence why anime and video game properties have become so popular,” explains Nic Aldridge of Bandai UK.

Anime has seen a huge explosion in the last three years, and this is fuelling a wave of new products. As Netflix’s library was exhausted by children during the lockdowns of the pandemic, the streaming service introduced around 200 different anime titles, bringing Japanese animation to an even wider audience.

Nic tells us: “When we lose kids to video games, what we try to do is get them back again by producing more sophisticated collectible action figures at higher price points, specifically made with this older age group in mind.”

At Funko, Chris Barnett says: “It’s the unpenetrated genres where the sharpest growth is being seen. Categories such as Anime, Gaming, Music and Sport are gaining in popularity, as consumers increasingly look to demonstrate their fandom in these areas.” A.B.Gee has recently been announced an official distribution partner of Funko. “With the huge growth we’re seeing in the kidult sector, this will be an amazing addition to our portfolio,” adds A.B.Gee’s Dave Wright.

At Jazwares, Holly Oldham says a successful action figure & collectible line has to reflect the depth of the characters within the property, so frequent refresh is key. The company’s portfolio, along with Roblox and Fortnite, also contains Minecraft, Sonic the Hedgehog, Street Fighter and Halo.

Keeping things bang up to date, Click Distribution’s success with its range of collectibles based on Piggy, the multiplayer, survival-horror game is set to be replicated with Roblox’s Pet Simulator X brand which launches this month, while one of the sector’s very latest developments will see Cool Cats and Cool Pets NFT collections joining forces with Toikido to bring the Cooltopia universe to life at retail. At Mattel, the company’s WWE Basic Action Figure Series has introduced a new vehicles segment to expand the WWE play pattern, and there are high hopes for the new Lightyear collection, which includes action figures, play sets and vehicles.

To find out more about these and other ranges in the Action Figures & Collectibles market, read the full article, which appeared in the June edition of Toy World, here.