Magic Box International Toys is a pioneer in the creation of collectible toys and play sets. Rachael Simpson-Jones spoke to CEO David Bella to find out more. 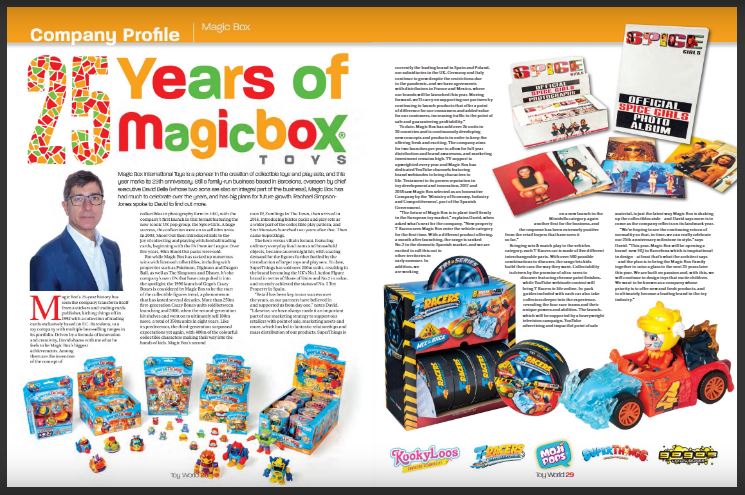 Still a family-run business based in Barcelona, overseen by chief executive David Bella (whose two sons are also an integral part of the business), Magic Box has had much to celebrate over the years, and has big plans for future growth.

Magic Box’s 25-year history has seen the company transform itself from a from a stickers and trading cards publisher, kicking things off in 1992 with a collection of trading cards exclusively based on F.C. Barcelona, to a toy company with multiple best-selling ranges in its portfolio. Driven by a formula of innovation and creativity, David shares with us Magic Box’s biggest achievements.

Magic Box has racked up numerous wins with licensed collectibles, including with properties such as Pokémon, Digimon and Dragon Ball, as well as The Simpsons and Disney. However, it’s the company’s own IPs that have catapulted it into the spotlight; the 1996 launch of Gogo’s Crazy Bones is considered by Magic Box to be the start of the collectible figures trend, a phenomenon that has lasted several decades.

David told us more about the Crazy Bones heyday, as well as the development of Superzings and Superthings, and how the company’s retail partnerships have been key to Magic Box’s success over the years.

“The future of Magic Box is to plant itself firmly in the European toy market,” explains David, when asked what’s next for the company. “New property T-Racers sees Magic Box enter the vehicle category for the first time. A month after launching, the range is ranked No.2 in the domestic Spanish market, and we are excited to roll this out to other territories in early summer. In addition, we are working on a new launch in the Minidolls category, again another first for the business, and the response has been extremely positive from the retail buyers that have seen it so far.”

Magic Box is certainly shaking up the collectibles aisle, and David says more is to come as the company reflects on its landmark year.

To read the full article, which appears in the May edition of Toy World, click here.