Introducing Israel-based Diamant Toys/Amav Enterprises, run by the third generation of the Diamant family and currently distributing to over 40 countries. 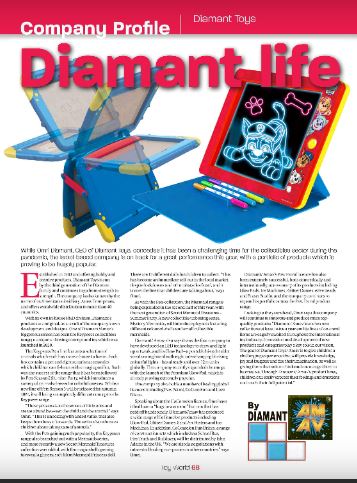 While Omri Diamant, CEO of Diamant Toys, concedes it has been a challenging time for the collectibles sector during the pandemic, the company is on track for a great performance this year, with a portfolio of products which is proving to be hugely popular.

With its own in-house R&D division, Diamant’s products are original; the result of the company’s own development and designs. One of its biggest successes has been the Keypsees collectibles range; a unique unboxing concept and toy which was launched in 2020.

“These pets awaken the senses of little ones and create a bond between the child and the animal,” says Omri. “This is unboxing with added value, that also keeps them busy afterwards. The series also educates children about taking care of animals.”

With the Pets gaining such popularity, the Keypsees range branched out with a Mermaids series, and more recently a new Secret Mermaid Treasures collection was added, with the magic shell opening to reveal a glittery, soft 40cm Mermaid Princess doll.

Another success story for Diamant/Amav is the Glow Pad – a portable, hi-tech tablet size drawing board with eight interchanging, blinking, colourful lights that has already sold over 12m units globally – and the company also holds a number of leading global licences including Paw Patrol, CoComelon and Love Diana, which have been applied to its products.

A wide range of CoComelon products includes Glow-Pad, Glitter Domes, Sand Art Posters, Ice Machines and Fun Bricks; a range of construction sets which includes a School Bus, Fire Truck and Bulldozer, and is distributed by John Adams in the UK, while the Paw Patrol licence has, to date, been applied to Glow Pads, Ice Machines, Glitter Domes, eZee Beads and Eraser Studio.

Looking to the year ahead, Omri says: “Diamant/Amav launches new collections at least twice a year and its lines of on-trend items are eagerly awaited throughout the international toy industry. Innovation and development of new products and categories play a key role in our vision.”

To find out more about the ranges discussed above, as well as upcoming range extensions, see the full article, which appeared in the February edition of Toy World here.