As part of our Ones to Watch feature, Toy World spoke to Nazneen Yasin, founder of the start-up traditional toy company Fabula Toys. 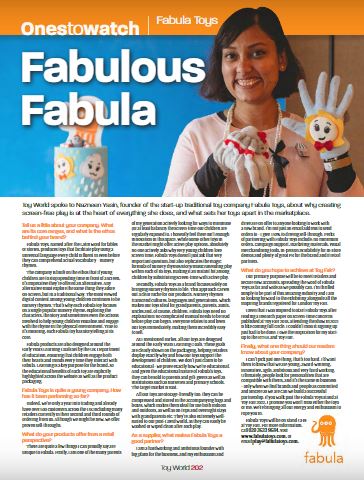 Nazneen explained why creating screen-free play is at the heart of everything she does, and what sets Fabula Toys apart in the marketplace.

Fabula Toys is named after the Latin word for fables or stories, and produces toys that facilitate play using a universal language every child is fluent in even before they can comprehend actual vocabulary – nursery rhymes.

The company is built on the ethos that if young children are to stop spending time in front of a screen, it’s imperative they’re offered an alternative. Any alternative must explore the same thing they adore on-screen, but in a traditional way. The most viewed digital content among young children continues to be nursery rhymes, and each Fabula toy focuses on a single popular nursery rhyme, exploring the characters, the story and sometimes even the actions involved to help young children visualise and engage with the rhyme in the physical environment. True to it’s meaning, each Fabula toy has storytelling at its core.

Only a year into trading, the company already has over 500 customers across the UK. “Although we might be new,” Nazneen tells us, “we offer proven sell-throughs. Fabula Toys as a brand focuses solely on bringing nursery rhymes to life. Nursery rhymes transcend cultures, languages and generations, which makes our toys ideal for grandparents, parents, aunts, uncles and, of course, children. Fabula toys need no explanation; no complicated manual needs to be read before play can begin. Everyone relates to and loves our toys immediately, making them incredibly easy to sell.”

To find out more about stocking Fabula’s range of toys, all designed around the Early Years Learning Goals, hear Nazneen describe her ambitions for the company and discover why the company’s first year at London Toy Fair (Stand GH9) has special significance for the team, read the full article, which appeared in the January edition of Toy World, here.