Exclusive: First The Entertainer-branded store to open in Spain

Based in Valencia, the store was part of the Poly Group’s store estate and has been refurbished and rebranded to look like a typical The Entertainer store in the UK.

I started by asking Gary the question which I am sure will be on everyone’s lips – why rebrand an existing Poly store as The Entertainer? Is this now the plan for Spain, to rebrand the entire store estate as The Entertainer, rather than Poly Group? The answer is that the future direction for the group very much depends on how this store performs.

“We’ve been looking to invest more in the Spanish market for a few years,” admitted Gary, “and we would have made this move earlier if it hadn’t been for Covid. We are nowhere near the level of market penetration we would like to have – we should have a far higher share than we have currently , so we feel there is a great opportunity to strengthen our presence in the Spanish market. We identified this as the perfect store to convert, to give us something tangible to measure the performance against. By converting an existing store, we already have a benchmark in terms of sales, and we can assess what difference The Entertainer branding makes. If the trial is successful, it could not only lead to other Poly stores being converted and rebranded, but also brand new stores being opened with The Entertainer branding.”

I asked Gary why this particular branch was chosen: “It is the one store in our Spanish portfolio where I walked in and felt it was just like being in one of our UK stores. The quality of the shop fittings, the in-store displays, the way the racking was laid out, the outlet’s position in the shopping centre – it was exactly what we wanted for this trial. There are also a lot of expats living in Valencia – someone actually recognized me while I was in the store!” 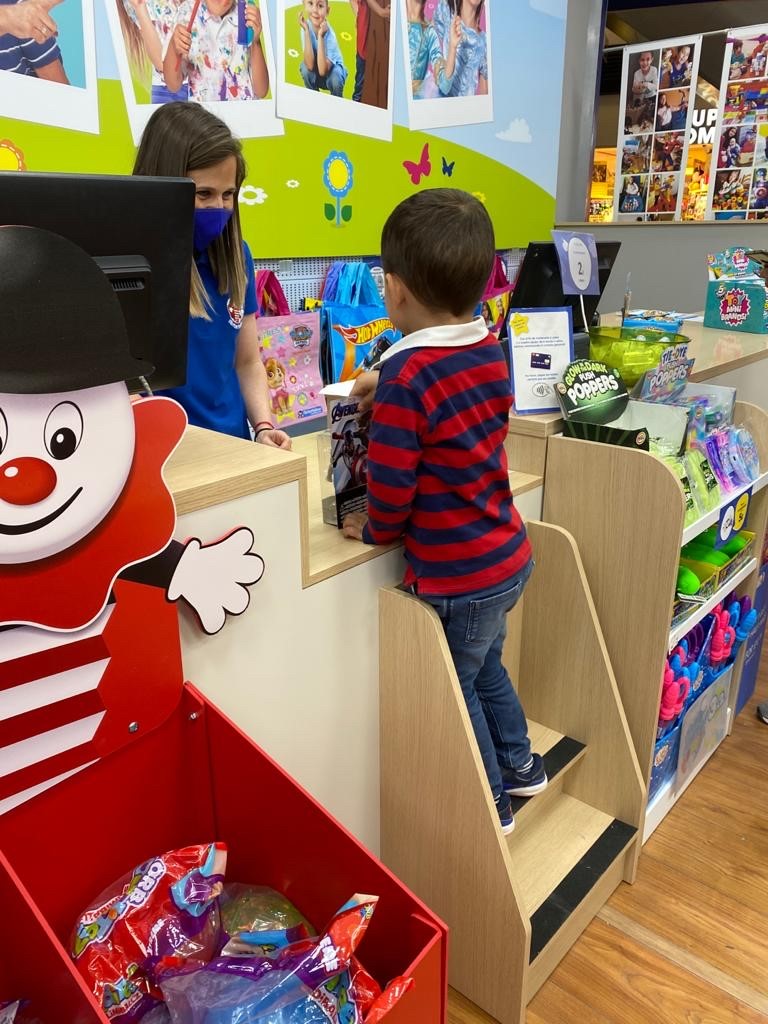 Steps at the till put kids at eye-level with employees, allowing them to pay for their toys easily and making the experience all the more fun.

Having identified the ideal store to rebrand, some serious work has gone into transforming it into a model The Entertainer outlet: the shop has been completely refurbished, with new graphics and The Entertainer-branded shelf edge labels and bags. All staff have been put through extensive The Entertainer training, and will wear the traditional blue The Entertainer t-shirt uniform.

I asked Gary how the product mix will differ from the UK, and indeed the current Poly Group range selection: “The ranging will be similar to our UK product selection, adjusted for country variants, as Poly already does – some brands just don’t work in the Spanish market – while merchandising will be of a higher standard than in many of the Poly stores. Shipping has undoubtedly been more complicated since Brexit – we have had to air freight Push Poppers to Spain to keep up with demand and keep stores stocked up. It has taken off just as explosively in Spain as it has in the UK.”

There was a soft launch of the new branch yesterday, while the grand opening will be this Saturday. While Gary and the team aren’t able to visit for the opening (“unfortunately, we can’t just parachute people in as we normally would”), there will be some UK representation in the form of character costume Jack, who I am told has arrived safely in preparation for opening. “It will actually be our first character visit anywhere since the end of 2019 – I very much hope there will be many more as the year progresses.”

Along with a relocation of the head office and increased investment in its Spanish website, this latest move clearly illustrates that The Entertainer is committed to strengthening its position in the Spanish market.