Exclusive: In praise of the craze – a look at Fidget Toys

Rachael Simpson- Jones talks to companies leading the charge in this arena to find out the history behind their fidget toys, and asks retailers what’s driving sales. 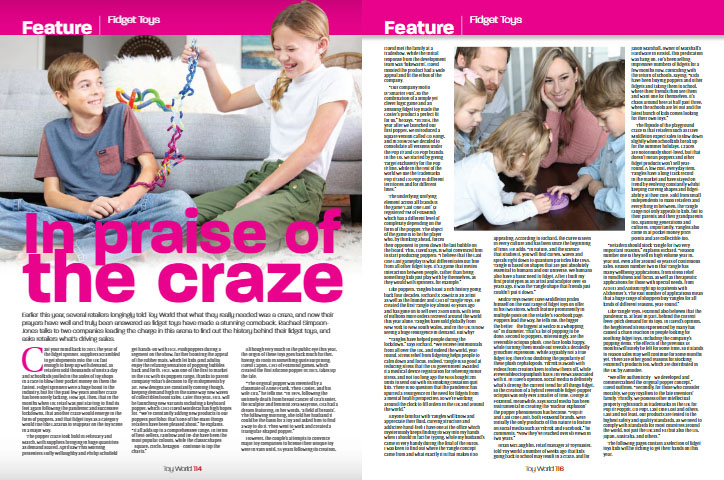 Earlier this year, several retailers longingly told Toy World that what they really needed was a craze, and now their prayers have well and truly been answered as fidget toys have made a stunning comeback.

The popper craze took hold in February and March, with suppliers bringing in huge quantities as demand soared. HGL was one of the first to market in the UK with its poppers range, thanks to parent company Tobar’s decision to fly in shipments by air. New designs are constantly coming though, keeping demand high in the same way new waves of collectibles boost sales.

Although very much in the public eye this year, the origin of these toys goes back much further, having its roots in something quite surprising, as David Capon, CEO of Foxmind games, explained to us, sharing the original vision that inspired the design. From this unusual inspiration, David saw the potential. “Our company motto is ‘Smarter Fun’, so the combination of a simple yet clever logic game and an amusing fidget toy made the product a perfect fit for us,” he said. “In 2019/20, we decided to consolidate all versions under the Pop It! and Go Pop! brands.”

Like poppers, Tangles boast a rich history. Richard X Zawitz is an artist, as well as the founder and CEO of Tangle Toys, who created the first Tangle toy almost 40 years ago. “There is no question that the pandemic has spurred a resurgence in the need for fidgets from a mental health perspective, so we’re working around the clock to fill orders in the UK and around the world,” he told us.

Midco Toys owner Dave Middleton prides himself on the vast range of fidget toys on offer in his two stores, and says that poppers lead the way, followed by reversible octopus plush, with social media driving the current trend for all things fidget.

Brian McLaughlin, retail manager at Toymaster, told Toy World a number of weeks ago that kids going back to school may result in a craze, and his prediction has borne out. Jason Marshall, of Marshall’s Hardware in Bristol, told us: “It’s chaos around here at half past three, when the schools are let out and the latest bunch of kids comes looking for their own toys.”

However, retailers are finding that fidget items often appeal just as much to adults as to children, with wellbeing applications being cited as just as important as the collectability and fun-factor. This should ensure year-round sales, and more longevity that a usual playground craze.

To find out more about the development and popularity of these latest crazes, read the full article, which appeared in the August edition of Toy World, here.